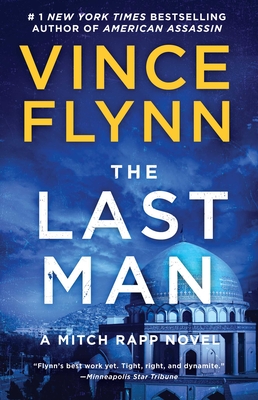 #1 New York Times bestselling author Vince Flynn “has never been better” (The Providence Journal) in this high-octane thriller following Mitch Rapp as he searches for a missing CIA asset, whose disappearance puts Rapp’s own life at risk.

Joe Rickman has spent the last eight years running the CIA’s clandestine operations in Afghanistan, working with every disreputable figure in the Islamic Republic. When he suddenly goes missing, the initial assumption is kidnapping, but Mitch Rapp knows certain things about his old friend that gives him pause.

When he’s ordered to find Rickman, no matter the cost, Rapp knows his mission will be an exceptionally dangerous one. With the Taliban, Iran, Pakistan, and Russia all vying for a piece of the war-torn state and the FBI dispatching their own special agent to investigate, Rapp is facing his most difficult assignment yet.

With white-knuckled twists and turns, The Last Man proves once again that Vince Flynn “is a master—maybe the master—of thrillers in which the pages seem to turn themselves” (Book Reporter).