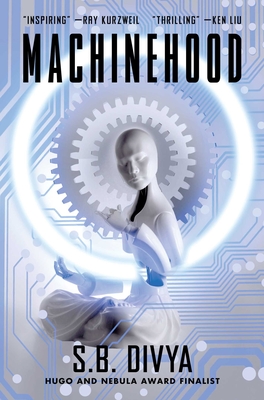 From the Hugo Award nominee S.B. Divya, Zero Dark Thirty meets The Social Network in this science fiction thriller about artificial intelligence, sentience, and labor rights in a near future dominated by the gig economy.

Welga Ramirez, executive bodyguard and ex-special forces, is about to retire early when her client is killed in front of her. It’s 2095 and people don’t usually die from violence. Humanity is entirely dependent on pills that not only help them stay alive, but allow them to compete with artificial intelligence in an increasingly competitive gig economy. Daily doses protect against designer diseases, flow enhances focus, zips and buffs enhance physical strength and speed, and juvers speed the healing process.

Welga, determined to take down the Machinehood, is pulled back into intelligence work by the government that betrayed her. But who are the Machinehood and what do they really want?

A thrilling and thought-provoking novel that asks: if we won’t see machines as human, will we instead see humans as machines?

“With clever invention and astute observation popping from every paragraph, Machinehood takes you on a thrilling ride through a gritty, panoramic future that showcases intelligence in all its manifestations, humanity in all its potentialities, the infinite grace of ourselves as well as of our creations.” —Ken Liu, author of The Grace of Kings and The Paper Menagerie and Other Stories

“From the opening manifesto to its ingenious technologies, Machinehood builds an inspiring and believable vision of the future that is both thought-provoking and hopeful. It will leave you wishing that tomorrow could arrive a little sooner.” —Ray Kurzweil, bestselling author, pioneering inventor, and renowned futurist

* “This stunning near-future thriller from Divya (Runtime) tackles issues of economic inequality, workers’ rights, privacy, and the nature of intelligence. . . . Crack worldbuilding and vivid characters make for a memorable, page-turning adventure, while the thematic inquiries into human and AI labor rights offer plenty to chew on for fans of big idea sci-fi. Readers will be blown away.” —Publishers Weekly, starred review

“A fantastic big-idea thriller, with plenty of action, and substantive, important perspectives on what the future might look like.” —Malka Older, author of Infomocracy, and the Hugo-finalist Centenal Cycle

S.B. Divya is a lover of science, math, fiction, and the Oxford comma. She enjoys subverting expectations and breaking stereotypes whenever she can. Divya is the Hugo and Nebula Award–nominated author of Runtime and coeditor of Escape Pod, with Mur Lafferty. Her short stories have been published at various magazines including Analog, Uncanny, and Tor. She is the author of the short collection, Contingency Plans for the Apocalypse and Other Situations, and debut novel, Machinehood. Divya holds degrees in computational neuroscience and signal processing, and she worked for twenty years as an electrical engineer before becoming an author. Find out more about her at SBDivya.com or on Twitter as @DivyasTweets.
Loading...
or
Not Currently Available for Direct Purchase