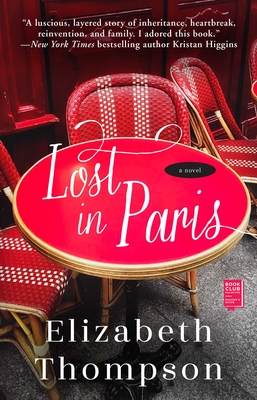 When a deed to an apartment in Paris turns up in an old attic trunk, an estranged mother and daughter must reunite to uncover the secret life of a family matriarch—perfect for fans of The Little Paris Bookshop and The Beekeeper’s Daughter.

Hannah Bond has always been a bookworm, which is why she fled Florida—and her unstable, alcoholic mother—for a quiet life leading Jane Austen-themed tours through the British countryside. But on New Year’s Eve, everything comes crashing down when she arrives back at her London flat to find her mother, Marla, waiting for her.

Marla’s brought two things with her: a black eye from her ex-boyfriend and an envelope. Its contents? The deed to an apartment in Paris, an old key, and newspaper clippings about the death of a famous writer named Andres Armand. Hannah, wary of her mother’s motives, reluctantly agrees to accompany her to Paris, where against all odds, they discover great-grandma Ivy’s apartment frozen in 1940 and covered in dust.

Inside the apartment, Hannah and Marla discover mysterious clues about Ivy’s life—including a diary detailing evenings of drinking and dancing with Hemingway, the Fitzgeralds, and other iconic expats. Outside, they retrace her steps through the city in an attempt to understand why she went to such great lengths to hide her Paris identity from future generations.

A heartwarming and charming saga set in the City of Lights, Lost in Paris is an unforgettable celebration of family and the love between a mother and a daughter.

Praise For Lost in Paris…

“A heartwarming story that mixes history and mother-daughter bonds in a wonderful way.” —PopSugar

"This debut novel will appeal to historical fiction readers, Francophiles, those who enjoy stories about mother-daughter relationships, and fans of Woody Allen’s 2011 movie, Midnight in Paris. The historical mystery, beautiful setting, and vivid characters make this a must-read." —Library Journal (starred review)

“Thompson intersperses entries from Ivy’s diary throughout, capturing the romance of 1920s Paris via Ivy’s encounters with Lost Generation luminaries like Hemingway, Stein, and Picasso. The satisfying ending provides a thoughtful resolution, as well as room for all of the characters to continue their growth. Readers who enjoy Abbi Waxman and Jenny Colgan will be drawn into this multigenerational story.” —Booklist

"In Elizabeth Thompson's Lost in Paris, the magical French capital comes alive in two timelines a century apart. You'll find yourself both in modern-day Paris, and in the 1920s Paris of Hemingway, Fitzgerald, and Picasso, as a powerful story of secrets across the generations unfolds. If you're a Francophile like I am—or if you're a fan of Midnight in Paris or Hemingway's A Moveable Feast—you'll eat this story up like a fresh baguette straight from a corner boulangerie. A tale of family, heritage, forgiveness, and finding the strength within, Lost in Paris sparkles and shines like the City of Light itself." —Kristin Harmel, New York Times bestselling author of The Book of Lost Names

"Lost in Paris has everything I love in a book: the magic of a romantic location, the intrigue of a family mystery, and the nostalgia of another era. An utterly charming read!" —Julia Kelly, internationally bestselling author of The Whispers of War and The Light Over London

"Lost in Paris is as delicious as a fresh, colorful macaron. With vivid descriptions, compelling characters, and a fascinating look into the past, Elizabeth Thompson has created a lovely story guaranteed to take readers on a journey they won’t forget." —RaeAnne Thayne, New York Times bestselling author of The Sea Glass Cottage

"A well-written character story set in one of the best cities in the world Paris. The setting works great here and enhances the story a mother-daughter relationship story that you follow along with and invest in and romance stories on two fronts." —Red Carpet Crash

"This book has a good mix of interesting storylines that keep the reader intrigued, smart, funny, and flawed characters, and also a few little twists along the way to make sure the reader doesn’t sit there smugly thinking they had figured it all out." —From the Inside

"Loved Elizabeth Thompson’s voice—the vivid descriptions of Paris and its sights and sounds, and the people drew me into the story... Elizabeth Thompson’s choice to use Ivy’s diary to connect the past to the present was executed flawlessly... The relationships between four generations of the same family are perfectly intertwined throughout the book... Like a red wine, Lost in Paris should be savored slowly for its blend of dynamic characters and well-paced storyline. Lost in Paris is a special vintage—ENJOY!" —Lady Celeste Reads Romance

"[Highly] recommend... A light mystery and the romantic streets of Paris give the story extra depth." —Barb's Book Reviews

Elizabeth Thompson is a lifelong Francophile with a degree in journalism, and Lost in Paris is her first novel. She currently resides in Tennessee with her husband and their Pembroke Welsh Corgi, Luna.
Loading...
or support indie stores by buying on