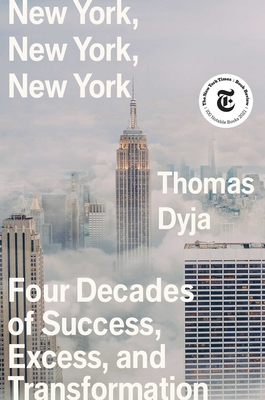 A lively, immersive history by an award-winning urbanist of New York City’s transformation, and the lessons it offers for the city’s future.

Dangerous, filthy, and falling apart, garbage piled on its streets and entire neighborhoods reduced to rubble; New York’s terrifying, if liberating, state of nature in 1978 also made it the capital of American culture. Over the next thirty-plus years, though, it became a different place—kinder and meaner, richer and poorer, more like America and less like what it had always been.

New York, New York, New York, Thomas Dyja’s sweeping account of this metamorphosis, shows it wasn’t the work of a single policy, mastermind, or economic theory, nor was it a morality tale of gentrification or crime. Instead, three New Yorks evolved in turn. After brutal retrenchment came the dazzling Koch Renaissance and the Dinkins years that left the city’s liberal traditions battered but laid the foundation for the safe streets and dotcom excess of Giuliani’s Reformation in the ‘90s. Then the planes hit on 9/11. The shaky city handed itself over to Bloomberg who merged City Hall into his personal empire, launching its Reimagination. From Hip Hop crews to Wall Street bankers, D.V. to Jay-Z, Dyja weaves New Yorkers famous, infamous, and unknown—Yuppies, hipsters, tech nerds, and artists; community organizers and the immigrants who made this a truly global place—into a narrative of a city creating ways of life that would ultimately change cities everywhere.

With great success, though, came grave mistakes. The urbanism that reclaimed public space became a means of control, the police who made streets safe became an occupying army, technology went from a means to the end. Now, as anxiety fills New Yorker’s hearts and empties its public spaces, it’s clear that what brought the city back—proximity, density, and human exchange—are what sent Covid-19 burning through its streets, and the price of order has come due. A fourth evolution is happening and we must understand that the greatest challenge ahead is the one New York failed in the first three: The cures must not be worse than the disease.

"[A] tour de force, a work of astonishing breadth and depth that encompasses seminal changes in New York’s government and economy, along with deep dives into hip-hop, the AIDS crisis, the visual arts, housing, architecture and finance..... [Dyja has] in this outstanding work, done all that a historian can do to light the way forward, by so vividly illuminating the past."—New York Times

“This engaging book has the potential to become a classic text.”—Library Journal

“[A] mammoth undertaking – a whirlwind history of the city from the late 1970s to the present… fast-moving, punchy prose…He’s a master of using perfectly chosen adjectives to sketch a character.” —New Statesman

"Superb reflections on a city resurgent...Dyja goes far beyond politics and Wall Street: he is equally interested in and intelligent about everything from Aids to hip-hop, Keith Haring and Anna Wintour, Spike Lee, Jay-Z and Elaine Kaufman…This is an especially important book for the majority of New Yorkers too young to remember the remarkable trajectory the city has experienced." —Charles Kaiser, The Guardian

[Dyja] boldly anatomizes New York in a phenomenally intricate and revelatory web of provocative juxtapositions…A dynamic, passionately knowledgeable, surprising, and gutsy chronicle of a world-shaping city and humanity itself in all its paradoxical wonder. —Booklist (starred review)

“Dyja’s prose sparkles and sings, revealing endlessly fascinating details while never bogging down or losing an overall sense of forward momentum. This is brilliant work on a broad canvas.” —Passport Magazine

“Dyja’s stellar achievement with this indispensable book has been to write of the last four decades of New York in the very way that the city likes to think of itself—as propulsive, alluring, energetic, infuriating, scrappy, lyrical, nostalgic, omniscient, staggering, memorable, magical. The result is a history like no other for a city like no other.” —SIMON WINCHESTER, New York Times bestselling author of The Professor and the Madman and The Men Who United the States

“This moment was made for New York, New York, New York. With writing like the city itself—undaunted, unswerving, vibrant, and urgent—Thomas Dyja has given each of us the key to the city. We should grab it so we can unlock how to renew and revitalize this cherished metropolis.” —RICHIE JACKSON, author of Gay Like Me: A Father Writes to His Son

“Tom Dyja paints a wry, entertaining, and important portrait of New York City over the past half century. Offering vibrant detail and a vivid cast of characters, his is a pointillist portrait that makes a clear point: change is the dominant melody of this city—a city that will not be strangled by bankruptcy, or a coronavirus, or the motley collection of boobs who govern and loudmouths who grab attention. New York will always transcend its afflictions because, in Whitman’s phrase, it contains ‘multitudes.’” —KEN AULETTA, New Yorker writer and author of The Streets Were Paved with Gold

Thomas Dyja is the author of the award-winning The Third Coast: When Chicago Built the American Dream, as well as three novels. He lives on the Upper West Side of Manhattan.
Loading...
or
Not Currently Available for Direct Purchase