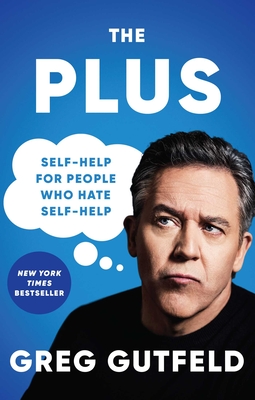 Self-Help for People Who Hate Self-Help

NEW YORK TIMES BESTSELLER
Greg Gutfeld wants to be your new guru, and he hates himself for it.

Before Greg Gutfeld was a Fox News star and a New York Times bestselling author, he was a self-help writer for health magazines who had no idea what he was talking about. But now, after years of experience, he finally feels qualified to guide people on the journey of life—call this book punishment for his sins, and a huge reward for you!

In The Plus, Greg teaches you how to brainwash yourself into better behavior, retaining the pluses in your life and eliminating the minuses. His approach to self-help is simple, and perfect for cynics; it’s not about positive thinking in the short term, it’s about positive being in the long term. With tough love and more than a little political incorrectness, he delivers sage wisdom such as:

-If you aren’t getting happier as you’re getting older, you’re doing it wrong.
-Resist the media’s command to expand destructive narratives.
-If you’re in the same place you were three years ago, wake up.
-Don’t tweet when drinking.

Modern life grows emptier and emptier as society becomes increasingly polarized, and even those who don’t subscribe to New Age beliefs are seeking comfort and meaning. In The Plus, Greg shows how skeptics too can advance themselves for the betterment of their lives and the healing of their communities.

Praise For The Plus: Self-Help for People Who Hate Self-Help…

“Employing his trademark barbed, self-effacing humor, Gutfeld espouses maintaining a positive attitude and trying to think and act in an unconventional manner…one of America’s most brilliant, thoughtful, and humane commentators.”  –The Federalist

Greg Gutfeld is a New York Times bestselling author, satirist, humorist, and magazine editor. He is the host of The Greg Gutfeld Show and cohost of The Five on Fox News. Prior to joining Fox, Gutfeld was editor of Men’s Health magazine. He later became editor of Stuff, helmed Maxim magazine in the United Kingdom, and was host of the legendary cult TV phenomenon Red Eye. Gutfeld lives in New York City with his wife. Follow Greg on Twitter @GregGutfeld, Facebook @GGutfeld, and Instagram @RealGregGutfeld.
Loading...
or support indie stores by buying on