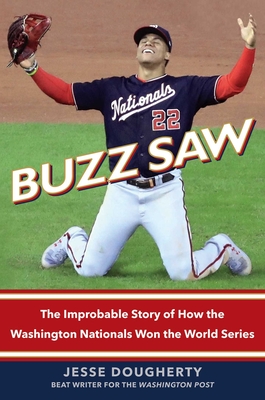 The remarkable story of the 2019 World Series champion Washington Nationals told by the Washington Post writer who followed the team most closely.

By May 2019, the Washington Nationals—owners of baseball’s oldest roster—had one of the worst records in the majors and just a 1.5 percent chance of winning the World Series. Yet by blending an old-school brand of baseball with modern analytics, they managed to sneak into the playoffs and put together the most unlikely postseason run in baseball history. Not only did they beat the Houston Astros, the team with the best regular-season record, to claim the franchise’s first championship—they won all four games in Houston, making them the first club to ever win four road games in a World Series.

“You have a great year, and you can run into a buzz saw,” Nationals pitcher Stephen Strasburg told Washington Post beat writer Jesse Dougherty after the team advanced to the World Series. “Maybe this year we’re the buzz saw.” Dougherty followed the Nationals more closely than any other writer in America, and in Buzz Saw he recounts the dramatic year in vivid detail, taking readers inside the dugout, the clubhouse, the front office, and ultimately the championship parade.

Yet he does something more than provide a riveting retelling of the season: he makes the case that while there is indisputable value to Moneyball-style metrics, baseball isn’t just a numbers game. Intangibles like team chemistry, veteran experience, and childlike joy are equally essential to winning. Certainly, no team seemed to have more fun than the Nationals, who adopted the kids’ song “Baby Shark” as their anthem and regularly broke into dugout dance parties. Buzz Saw is just as lively and rollicking—a fitting tribute to one of the most exciting, inspiring teams to ever take the field.

Praise For Buzz Saw: The Improbable Story of How the Washington Nationals Won the World Series…

"Emotional and informative, this is a home run for any fan of the sport."


"[H]aving something other than politics to stress us out is a very good thing. Thank heavens for the 2019 Washington Nationals...What we need now more than ever is to soak in the memories of that 2019 team...Dougherty’s book does exactly what a Nats fan—or any baseball fan who appreciates the Nats’ accomplishment—would want: It chronicles the championship season with all its drama...Even though I’m a voracious consumer of Nats news, I still found Dougherty’s tale fresh and informative. He focuses on the players and specific games, as a fan would expect, rather than on front-office politics...Dougherty doesn’t miss a single high or low, and in between, he mixes in enough fascinating background on various players to satisfy the die-hard Nats fan."

"What the Nationals accomplished was a singular historical achievement unmatched in baseball history...Dougherty details both the big and small moments that made the Nationals resurgence possible. The final product makes Buzz Saw the needed work that puts the miraculousness of the Nationals comeback in perspective."

“Remarkable stories these days can quickly disappear into the blast of internet drama or depressing news cycles. That gives even more reason to go back during spring training and revisit one feel-good story of 2019: the Washington Nationals’ improbable championship run…The [Washington] Post’s beat reporter for the Nats, Jesse Dougherty, has cranked out a wonderful book: Buzz Saw narrates the wild 2019 season, from the team putting up the worst season start in its history to beating the best-in-baseball Houston Astros for the championship. It’s a feel-good story not just for Nats fans, especially given the new cheating scandal that has swallowed up the Astros since the World Series and made them baseball’s villains…”


“As an insider’s view of a remarkable run, this should be enjoyed by all baseball fans.”


“[T]his informative and remarkably up-to-date chronicle recreates a truly memorable year in baseball…[T]he Nationals’ triumph was, and remains, a feel-good story in a troubled sport, and this riveting account comes at just the right time, with a new season about to being. Play ball!”

Jesse Dougherty is the Washington Nationals beat reporter for The Washington Post, and previously covered college athletics, high school sports, and the Washington Capitals. Before joining The Washington Post in February 2017, he briefly covered the NHL for the Los Angeles Times. Jesse was born in Philadelphia and graduated from Syracuse University.
Loading...
or
Not Currently Available for Direct Purchase