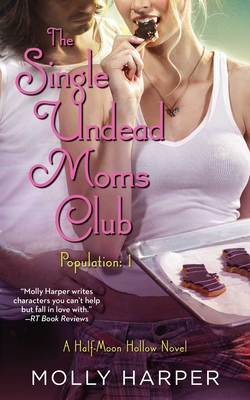 In the next book in the Half Moon Hollow paranormal romance series, Libby (a widow-turned-vampire) struggles with her transition, and finds out it sucks to be the only vampire member of the PTA…

Widow Libby Stratton arranged to be turned into a vampire after she was diagnosed with late-stage cancer. It wasn’t the best idea she’s ever had, but she was desperate—she’s not about to leave her seven-year-old son to be raised by her rigid, overbearing in-laws.

On top of transition issues, like being ignored at PTA meetings and other mothers rejecting her son’s invitations for sleepovers, Libby must deal with her father-in-law’s attempts to declare her an unfit mother, her growing feelings for Wade—a tattooed redneck single dad she met while hiding in a closet at Back to School Night—and the return of her sire, who hasn’t stopped thinking about brave, snarky Libby since he turned her.

With the help of her new vampire circle, Libby negotiates this unfamiliar quagmire of legal troubles, parental duties, relationships, and, as always in Molly Harper’s distinct, comedic novels, “characters you can’t help but fall in love with” (RT Book Reviews).

Molly Harper is the author of two popular series of paranormal romance, the Half-Moon Hollow series and the Naked Werewolf series. She also writes the Bluegrass ebook series of contemporary romance. A former humor columnist and newspaper reporter, she lives in Michigan with her family, where she is currently working on the next Southern Eclectic novel. Visit her on the web at MollyHarper.com.
or support indie stores by buying on
(This book is on backorder)
Copyright © 2020 American Booksellers Association