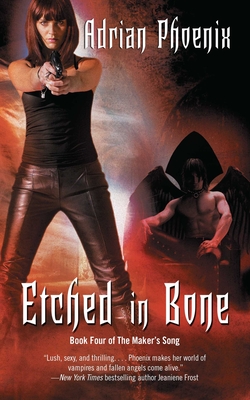 More beautiful and powerful than any creature the world has ever seen, Dante Baptiste has become the supreme target of the three worlds that spawned him. The mortal agents of the Shadow Branch have tried to control his mind through psychological torture. The vampire elders who guide nightkind society have plotted to use him in their bloodthirsty bid for power. And the Fallen have waited for millennia for Dante to claim his birthright as their Maker. But Dante belongs to no one—except the woman he loves.

Determined to face the Fallen and the world on his own terms, Dante hopes to piece together his shattered past and claim his future, with FBI agent Heather Wallace at his side. But in Heather’s human family awaits an unexpected enemy. One who could rip Heather from Dante’s heart and fill the holes with bullets. One who could force Dante to choose his darkest destiny—as the Great Destroyer.

Adrian Phoenix lives in Oregon with her three cats and travels to New Orleans whenever possible.
Loading...
or support indie stores by buying on