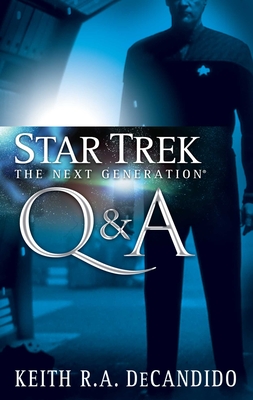 The Next Generation: Q&A

After facing the Borg menace, the crew of the U.S.S. Enterprise is looking forward to a little exploration when the enigmatic Q informs them that the universe is at stake if they don’t unravel the mystery of a strange planet in this Star Trek: The Next Generation novel.

Nearly two decades ago, Jean-Luc Picard took command of the U.S.S. Enterprise NCC-1701-D, knowing it was an honor without equal.

On her first mission, the Enterprise was sent to Farpoint Station for a simple, straightforward investigation. Perfect for a crew that had never served together. Then there was Q; an omnipotent lifeform that seemed bent on placing obstacle after obstacle in the ship’s—and in particular in Picard’s—way. And it hadn’t ended with that first mission. When he was least expected, Q would appear. Pushing, prodding, testing. At times needling captain and crew with seemingly silly, pointless, and maddening trifles. Then it would turn all too serious, and the survival of Picard's crew was in Q’s hands.

Why was it today that Picard was remembering the day he took command of the Enterprise-D? Now he commanded a new ship, the Enterprise-E, with a different crew. But Picard couldn’t shake the feeling that something all too familiar was going on. All too awful. All too Q.

Keith R.A. DeCandido was born and raised in New York City to a family of librarians. He has written over two dozen novels, as well as short stories, nonfiction, eBooks, and comic books, most of them in various media universes, among them Star Trek, World of Warcraft, Starcraft, Marvel Comics, Buffy the Vampire Slayer, Serenity, Resident Evil, Gene Roddenberry’s Andromeda, Farscape, Xena, and Doctor Who. His original novel Dragon Precinct was published in 2004, and he's also edited several anthologies, among them the award-nominated Imaginings and two Star Trek anthologies. Keith is also a musician, having played percussion for the bands the Don't Quit Your Day Job Players, the Boogie Knights, and the Randy Bandits, as well as several solo acts. In what he laughingly calls his spare time, Keith follows the New York Yankees and practices kenshikai karate. He still lives in New York City with his girlfriend and two insane cats.
or support indie stores by buying on
(This book is on backorder)
Copyright © 2020 American Booksellers Association