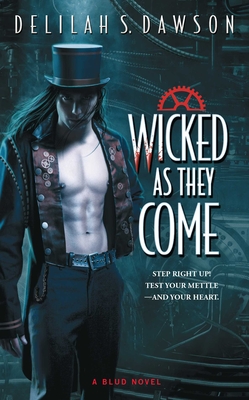 Wicked as They Come (A Blud Novel #1)

The first in a steampunk paranormal romance series in which a woman is transported to a world filled with vampires and magic.

When nurse Tish Everett forced open the lovely locket she found at an estate sale, she had no idea she was answering the call of Criminy Stain, from the far off land of Sang. He’d cast a spell for her, but when she’s transported right to him, she’s not so sure she’s ready to be under the spell of another man. If only Criminy wasn’t so deliciously rakish…

Half the inhabitants of Sang are Pinkies—human—and the other half are Bludmen, who in Tish’s world would be called vampires. But they don’t mess with any of the bat/coffin/no sunlight nonsense. They’re rather like you and me, just more fabulous, long living, and mostly indestructible—they’re also very good kissers. But when the evil Mayor of Manchester (formerly Bludchester) redoubles his efforts to rid Sang of the Bludmen once and for all, he steals Tish’s locket in hopes of traveling back to her world himself for reinforcements. Criminy and Tish must now battle ghosts, sea monsters, wayward submarines, a secret cabal, and thundering Bludmares to get the locket back and allow Tish to return home…but has she found love with Criminy? Could she stay in Sang forever?

Delilah S. Dawson is the author of Hit, Servants of the Storm, Strike, the Blud series, Star Wars novels and short stories, a variety of short stories, comics, and essays, and the Shadow series as Lila Bowen. She lives in Georgia with her family and a fat mutt named Merle. Find her online at WhimsyDark.com.
Loading...
or support indie stores by buying on