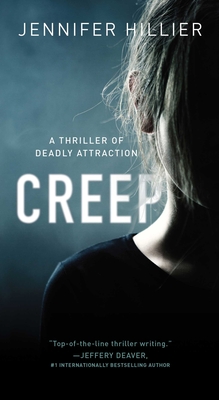 Pulsing with the dark obsession of Radiohead’s song “Creep,” Jennifer Hillier’s superb debut thriller is a terrifying cat-and-mouse game between a woman with everything to lose, and the lover she couldn't resist…who’s now the monster who won’t let her go.

A popular psychology professor in Seattle, Sheila works hard to keep her secrets hidden. On the surface, she’s an expert in human behavior and a well-liked educator, but nobody knows she’s a recovering sex addict in therapy—not even the love of her life, Morris. And she needs it to stay that way, or she could lose everything.

But Ethan Wolfe is impossible to resist. The graduate student is brilliant, charming, and seductive as hell. He’s also Sheila’s teaching assistant, and thirteen years her junior. Ignoring the risks to her career and relationship, they begin an illicit affair that lasts three months, until Morris asks her to marry him. Determined to get her life back on track, Sheila commits to a future with her fiancé, a man she’s not sure she deserves.

But Ethan can’t move on so easily. He didn’t pursue his professor for as long as he did to get dumped for some boring, middle-aged suit. Ethan’s made plans too, and he doesn’t take rejection well. When the body of one of Sheila’s students is discovered floating in Puget Sound—a young woman Ethan was rumored to have dated—it’s clear that the graduate student has secrets of his own.

And he’s not about to let Sheila get away.

"Hillier will likely have best sellers in the future thanks to her suspenseful plotting and solid character development...this fast-paced page-turner will keep fans of Lisa Gardner and Chelsea Cain guessing." --Library Journal

"An engaging thriller, with the kind of twisted story that makes you a bit queasy even as you can’t look away...Hillier nicely keeps readers on their toes...Psychological thrillers are tough to execute, because their authors must create stories that infiltrate readers’ minds, pulling them into the plots as more participants than observers. Hillier pulls off that sleight of narrative hand with remarkable skill." --Booklist

"As summer reads go, fans are going to have a hard time finding anything as tense, page-turning and bothersome as Creep, a truly frightening debut from Jennifer Hillier." --Suspense Magazine

Jennifer Hillier made her fiction debut with Creep and is now the author of several psychological thrillers, including Freak and The Butcher. Originally from Canada, she spent eight years in the Pacific Northwest before returning to the Toronto area, where she lives with her husband and son. Visit her on the web at JenniferHillierBooks.com.
Loading...
or support indie stores by buying on
(This book is on backorder)