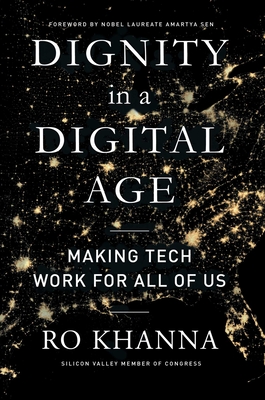 Dignity in a Digital Age

Making Tech Work for All of Us

Congressman Ro Khanna offers a revolutionary roadmap to facing America’s digital divide, offering greater economic prosperity to all. In Khanna’s vision, “just as people can move to technology, technology can move to people. People need not be compelled to move from one place to another to reap the benefits offered by technological progress” (from the foreword by Amartya Sen, Nobel Laureate in Economics).

In the digital age, unequal access to technology and the revenue it creates is one of the most pressing issues facing the United States. There is an economic gulf between those who have struck gold in the tech industry and those left behind by the digital revolution; a geographic divide between those in the coastal tech industry and those in the heartland whose jobs have been automated; and existing inequalities in technological access—students without computers, rural workers with spotty WiFi, and plenty of workers without the luxury to work from home.

Dignity in the Digital Age tackles these challenges head-on and imagines how the digital economy can create opportunities for people all across the country without uprooting them. Congressman Ro Khanna of Silicon Valley offers a vision for democratizing digital innovation to build economically vibrant and inclusive communities. Instead of being subject to tech’s reshaping of our economy, Representative Khanna argues that we must channel those powerful forces toward creating a more healthy, equal, and democratic society.

Born into an immigrant family, Khanna understands how economic opportunity can change the course of a person’s life. Anchored by an approach Khanna refers to as “progressive capitalism,” he shows how democratizing access to tech can strengthen every sector of economy and culture. By expanding technological jobs nationwide through public and private partnerships, we can close the wealth gap in America and begin to repair the fractured, distrusting relationships that have plagued our country for far too long.

Moving deftly between storytelling, policy, and some of the country’s greatest thinkers in political philosophy and economics, Khanna presents a bold vision we can’t afford to ignore. Dignity in a Digital Age is a roadmap to how we can seek dignity for every American in an era in which technology shapes every aspect of our lives.

Praise For Dignity in a Digital Age: Making Tech Work for All of Us…

“In this passionate and inspiring book, Khanna offers a vision for creating spaces for rational exchange in digital media that do not serve first and foremost economic interests. I am impressed by the precise imagination of this well-informed politician.”
—Jürgen Habermas, Professor Emeritus of Philosophy, Johann Wolfgang Goethe University of Frankfurt am Main

“Is there any dignity in digital? That’s a great question to ask in the wake of the attack on the Capitol on January 6, 2021, which got a toxic assist from tech giants like Facebook. It seems more clear than ever—from misinformation to hate speech, from screen addiction to the immense wealth held by tech billionaires—that tech is working against us more than for us, as it was intended at the dawn of the internet age. It’s to Ro Khanna’s credit then that he is trying to change the narrative so that we can democratize the inventions that were paid for by the American people and let us all share in the wonders they are capable of delivering. If you are interested in trying to even the digital playing field as we move to even more critical technologies of the future, you should read this book to find out how.”
—Kara Swisher, New York Times columnist and cohost of Pivot and host of Sway podcasts

“In his new book, California Representative Ro Khanna rolls out a vision to train rural as well as urban job-seekers to build 'digital' roads, bridges, and other aspects of infrastructure. Calling simultaneously for effective regulation of Big Tech, and protection of local community, Khanna envisions redistributing opportunities from coastal cities to rural middle-America, bridging cultural differences, and creating a new cosmo-local culture. An exciting vision, brilliantly rendered—a must read.”
—Arlie Russell Hochschild, author of Strangers in Their Own Land: Anger and Mourning on the American Right

“This book is a highly principled, empirically grounded, progressive blueprint for building an inclusive society in which all Americans share a common national identity and participate in constructive dialogue. It is founded on the possibilities of sharing technology much more widely, on building the skills and capabilities of all people, and on the basic principles of inclusion and participatory democracy to chart a path to a flourishing society.”
—James J. Heckman, Nobel Prize winner and professor of economics at the University of Chicago

“Congressman Ro Khanna’s book, Dignity in a Digital Age, is both a practical and aspirational guide to the future of tech, governance, and equity. Congressman Khanna leans on critical race and gender theorists, economists, and philosophers to articulate a vision for the future of the technology sector that centers racial and gender justice and eschews the digital segregation that has defined the tech sector since its infancy. Dignity in a Digital Age asks the question, ‘What could our country look like if we legislated and designed for marginalized people to lead the next era of Silicon Valley?’ and leads its reader to a measured understanding of how our country can’t afford any other alternative. Too often, the voices of people of color who’ve called for a radical reimagining of technology companies, their hiring and retention practices, and the products they produce, have been shouted down as too radical or their ideas too impractical. Dignity in a Digital Age not only amplifies those leaders, their stories, and their solutions, but provides a legislative and policy roadmap for anyone unsure of how to reach that vision.”
—Kimberlé Crenshaw, co-founder of the African American Policy Forum and professor of law at UCLA and Columbia University

"It might seem counterintuitive for a member who represents Silicon Valley to write a book on expanding technology to the middle of the country, but that is precisely why it is so important. In this ‘shake the snow globe’ moment, Representative Khanna makes a compelling case for place-based policymaking and how a more well-dispersed innovation economy can help rising cities thrive.”
—Steve Case, author of The Third Wave, chairman and CEO of Revolution, and cofounder of America Online

“In Dignity in a Digital Age, Khanna provides a compelling vision of how spreading opportunities in the technology revolution across America can contribute to healing the nation's wounds. Today's technologies allow workers to collaborate on projects with diverse people in disparate locations while staying rooted in their communities. This joint work has the potential to humanize differences and increase the democratic intelligence of the body politic, allowing America to live up to its founding vision.”
—Charles Taylor, Professor Emeritus of Philosophy, McGill University

“Ro Khanna is a great American dreamer. His dream, powerfully presented here in personal, political, and philosophical registers, is of a twenty-first-century democracy—multiracial and multiethnic, with fair opportunity for all to participate in the extraordinary fruits of American technological innovation. Deeply rooted in values of equality, freedom, and public reason, Khanna’s democracy is also rooted in places—from redwood forests to Gulf Stream waters, from diamond deserts to waving wheat fields. It is a democracy in which strong attachments to families, neighborhoods, and local communities—places that people call their homes—is married to a capacious, generous, inclusive sense of justice. This is the American democracy that my grandparents immigrated for, that my father defended on the beaches of Normandy and in the Ardennes Forest, and that I hope my own children live in. We are in danger of losing it. But with people like Ro Khanna fighting for it, with great moral clarity and political energy, we all have reason to hope.”
—Joshua Cohen, coeditor of Boston Review and member of faculty, Apple University

“In this deeply considered and precisely detailed examination of technology’s impact on the country’s financial future and emotional present, Khanna presents policy initiatives that aim to bring civility back to public discourse, both online and in person, and to level the employment playing field. With both anecdotal accounts and factual evidence, Khanna champions the responsible use of technology to improve lives and unite factions.”
—Booklist

"Khanna has a nuanced take on the tech industry and offers genuine solutions to significant problems plaguing the country... [a] commonsense call for change."
—Publishers Weekly

“Just on the evidence of his new book, Ro Khanna is one of the broadest, brightest and best-educated legislators on Capitol Hill... His book is bulging with ideas about how to transform big tech from a huge threat to liberty into a genuine engine of democracy.”
—The Guardian US

“Congressman Ro Khanna (D-Calif.) argues democratizing access to tech can strengthen both the economy and our social fabric with a roadmap to bridging the geographic and digital divides.”
—Fortune

Ro Khanna represents Silicon Valley in Congress. He has taught economics at Stanford, served as Deputy Assistant Secretary of Commerce in the Obama Administration, and represented tech companies and startups in private practice. He is the author of Progressive Capitalism: How to Make Tech Work for All of Us. He enjoys spending time with his wife and two children in Washington, DC, and Fremont, California.
Loading...
or support indie stores by buying on