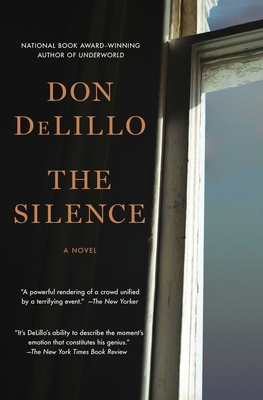 From the National Book Award–winning author of Underworld, a “daring…provocative…exquisite” (The Washington Post) novel about five people gathered together in a Manhattan apartment, in the midst of a catastrophic event.

It is Super Bowl Sunday in the year 2022. Five people, dinner, an apartment on the east side of Manhattan. The retired physics professor and her husband and her former student waiting for the couple who will join them from what becomes a dramatic flight from Paris. The conversation ranges from a survey telescope in North-central Chile to a favorite brand of bourbon to Einstein’s 1912 Manuscript on the Special Theory of Relativity.

Then something happens and the digital connections that have transformed our lives are severed.

What follows is a “brilliant and astonishing…masterpiece” (Chicago Tribune) about what makes us human. Don DeLillo completed this novel just weeks before the advent of the Covid pandemic. His language, the dazzle of his sentences offer a kind of solace in our bewildering world. “DeLillo’s shrewd, darkly comic observations about the extravagance and alienation of contemporary life can still slice like a scalpel” (Entertainment Weekly).

“In this wry and cutting meditation on collective loss, a rupture severs us, suddenly, from everything we’ve come to rely on. The Silence seems to absorb DeLillo’s entire body of work and sand it into stone or crystal.” —Rachel Kushner

Praise For The Silence: A Novel…

Praise for Don DeLillo and The Silence:

"DeLillo has a special receiver that we the rest of us don’t have. He can hear and see things in the culture long before everybody else does. Every sentence radiates with his uncanny feeling for this moment and for the moment about to come." —Rachel Kushner, author of The Hard Crowd

"DeLillo . . . creates a powerful rendering of a crowd unified by a terrifying event that defies all available models of comprehension." —The New Yorker

"[Readers] will find something poignant and terrible in this strange unbroken silence."
—Michael Gorra, NY Review of Books

“[DeLillo] isolate[s] the raw material of the form, the language, through speech fragments and monologues, in the same way a painter might with color ... It’s an ability of DeLillo’s both philosophic and poetic, to stare at the familiar thing, to see the familiar new…”
—Alexander Sammartino, Literary Hub

"DeLillo's prose is always supple, his gaze into our culture's black hole as penetrating as ever. Equal parts lush and spare, The Silence never settles for easy answers."
—Hamilton Cain, Minneapolis Star-Tribune

"DeLillo's shrewd, darkly comic observations about the extravagance and alienation of contemporary life can still slice like a scalpel."
—Leah Greenblatt, EW

“To read DeLillo is to engage in a process wherein the author’s clarity forces our own...He treats the topical...as a yearning for commonality, mutuality, something to share...He wants to tell us not just what is, but how it feels, and It’s this ability to describe the moment’s emotion that constitutes his genius.”
—Joshua Cohen, New York Times Book Review

"It is in his deft handling of the novel event's consequences—the space he creates in the wake of disruption—that DeLillo achieves his most profound effects."
—M. C. Armstrong, The Brooklyn Rail

“DeLillo is the premiere 'writer’s writer'…He…returns with new language, reconstructing sentence by sentence and paragraph by paragraph true-feeling motifs about how all of this works.”
—Lauren Michele Jackson, Ssense

"In this wry and cutting meditation on collective loss, a rupture severs us, suddenly, from everything we've come to rely on. The Silence seems to absorb DeLillo's entire body of work and sand it into stone or crystal."
—Rachel Kushner

"A swift and searing haunting of a novel. An encapsulation of our continuing crisis of aberration and pause. The Silence is prime DeLillo.”
—Joy Williams

"DeLillo (Zero K) applies his mastery of dialogue to a spare, contemplative story...In the end, readers gain the timely insight that some were born ready for disaster while others remain unequipped...the work stands out among DeLillo’s short fiction."
—Publisher's Weekly

"Don DeLillo has written about America in the 20th century so acutely and capaciously that he's become a fixed star in our literary firmament. . . . . His work is darkly funny . . . [The Silence] is a powerful, short novel."
—Carolyn Kellogg, Los Angeles Times

"[DeLillo] is our laureate of paranoia and dread, a man who fully tapped into the mood of his age, as vital at his peak as any writer alive. . . . [The Silence] is a pristine disaster novel. . . . [H]is best writing here reminds us that, as he puts it . . .  'Life can get so interesting that we forget to be afraid.'"
—Dwight Garner, The New York Times

"Shrewd . . . . It’s tempting to view The Silence as reflective of the COVID-19 era, but it’d be wrong. . . . In spite of its short length, it gets at something deeper and, in its emphasis on where individuals choose to direct their attention, something more quintessentially American. If you were magically freed from all your digital obligations, how would you occupy yourself? If you had the option, would you choose it?"
—J. Howard Rosier, Boston Globe

“DeLillo delights in, rather than despairs over, the absurdities of modern experience...As an oenophile loves wine, Don DeLillo loves words . . The field of language is the real setting of The Silence."
—Sam Sacks, Wall Street Journal

"Surging forth at full throttle before settling down to seated stillness, The Silence is a dark and luminous, amusing and devastating theater of systemic shocks and confluent paradoxes. . . . DeLillo is often lauded as something of a soothsayer, and The Silence, an engrossing addition to his oeuvre, is sure to add credence to that reputation."
—Paul D'Agostino, Hyperallergic

“An apocalyptic novel for our times”
—Guardian, Book of the Week

“The Silence is a horrifyingly resonant book”
—Observer

“DeLillo is a master stylist, and not a word goes to waste.”
—Anne Enright, Guardian

“Few people write as gorgeously as DeLillo can”
—Daily Telegraph

"THE SILENCE celebrates the muted hysteria of intelligent human beings in the face of universal calamity."
—Graham Robb, The Spectator