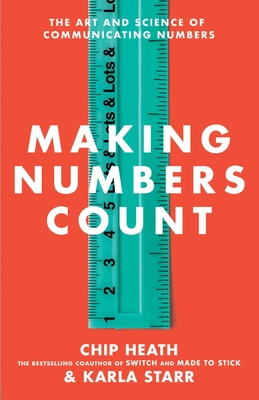 The Art and Science of Communicating Numbers

How much bigger is a billion than a million?

Understanding numbers is essential—but humans aren’t built to understand them. Until very recently, most languages had no words for numbers greater than five—anything from six to infinity was known as “lots.” While the numbers in our world have gotten increasingly complex, our brains are stuck in the past. How can we translate millions and billions and milliseconds and nanometers into things we can comprehend and use?

Author Chip Heath has excelled at teaching others about making ideas stick and here, in Making Numbers Count, he outlines specific principles that reveal how to translate a number into our brain’s language. This book is filled with examples of extreme number makeovers, vivid before-and-after examples that take a dry number and present it in a way that people click in and say “Wow, now I get it!”

You will learn principles such as:

-SIMPLE PERSPECTIVE CUES: researchers at Microsoft found that adding one simple comparison sentence doubled how accurately users estimated statistics like population and area of countries.
-VIVIDNESS: get perspective on the size of a nucleus by imagining a bee in a cathedral, or a pea in a racetrack, which are easier to envision than “1/100,000th of the size of an atom.”
-CONVERT TO A PROCESS: capitalize on our intuitive sense of time (5 gigabytes of music storage turns into “2 months of commutes, without repeating a song”).
-EMOTIONAL MEASURING STICKS: frame the number in a way that people already care about (“that medical protocol would save twice as many women as curing breast cancer”).

Whether you’re interested in global problems like climate change, running a tech firm or a farm, or just explaining how many Cokes you’d have to drink if you burned calories like a hummingbird, this book will help math-lovers and math-haters alike translate the numbers that animate our world—allowing us to bring more data, more naturally, into decisions in our schools, our workplaces, and our society.

Praise For Making Numbers Count: The Art and Science of Communicating Numbers…

"Concise, breezy and pragmatic, Making Numbers Count clocks in at a spare 135 pages of primary text. If you started reading it on the Acela when you left New York, you’d finish it by the time you arrived in Boston—with more than enough time left over to peruse the endnotes, review the consolidated advice in the appendix and ponder the authors’ core maxim, which comes to a mere eight words: ‘Use whole numbers, not too many. Preferably small.’” —Wall Street Journal

“This cure for statistical illiteracy couldn’t come at a better time or from a better team—a psychologist and a journalist present remarkably practical techniques for comprehending and communicating the math that really matters.” —Adam Grant

“A very enjoyable read, this book is filled to the brim with great examples of extreme number makeovers, as well as impressive before and after examples that present a dry number in an easy-to-digest way.” —CEO Today

“A unique popular math book . . . [that] delivers a painless, ingenious education in how to communicate statistics and numbers to people who find them confusing. . . . Packed with tables, anecdotes, and amusing facts, the narrative makes math accessible. . . . Astute advice for businesspeople and educators.” —Kirkus Reviews

PRAISE FOR THE POWER OF MOMENTS:

"I read this cover to cover and learned something new on each page. Beautifully written, brilliantly researched—I'm recommending it to everyone I know!" —Angela Duckworth, New York Times–bestselling author of Grit

“The most interesting, immediately actionable book I’ve read in quite a while. I walked away with new ideas for motivating employees, delighting customers, engaging students, and even planning family vacations. If life is a series of moments, the Heath brothers have transformed how I plan to spend mine.”—Adam Grant, New York Times bestselling author of Give and Take, Originals, and Option B with Sheryl Sandberg

“This terrific book is bursting with practical insights and memorable stories on every page. It's as relevant to product designers and meeting planners as it is to teachers and parents. I've already put many of its novel suggestions to work. Don't miss it.”—Eric Ries, author of bestselling author of The Lean Startup, The Startup Way

"Chip Heath of Stanford and Dan Heath of Duke argue persuasively that any organization that creates peak moments--for its customers, its employees, or its students--will enjoy benefits that range from fanatical loyalty to revenue growth. In this entertaining and informative read, they explain just how to create those moments and how to turn them into a competitive advantage."—BizEd

“A sincere introduction to how readers can shape and improve the peaks in their own experiences. Infused with positivity and enthusiasm…. Readers hungry for a bigger slice of life will find this book valuable. Heuristic advice and life-affirming direction form a gratifying combination in this motivational handbook.”—Kirkus

Chip Heath is a professor at Stanford Graduate School of Business. Chip and his brother Dan have written four New York Times bestselling books: Made to Stick, Switch, Decisive, and The Power of Moments. Their books have sold over three million copies worldwide and have been translated into thirty-three languages including Thai, Arabic, and Lithuanian. He has helped over 530 startups refine and articulate their strategy and mission. Chip lives in Los Gatos, California.

Karla Starr has written for O, The Oprah Magazine; The Atlantic; Slate; Popular Science; and appeared on CBS Sunday Morning. A member of the National Association of Science Writers and the recipient of a Best Science/Health award from the Society of Professional Journalists, her first book, Can You Learn to Be Lucky? Why Some People Seem to Win More Often Than Others, was named a Fast Company Best Book of the Year. She writes at KStarr.com and lives in Portland, Oregon.
Loading...
or support indie stores by buying on