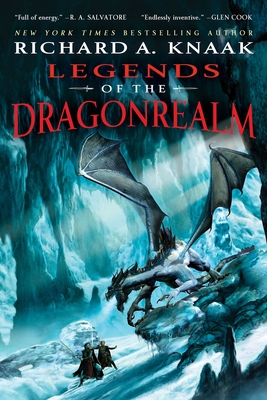 Legends of the Dragonrealm

In addition to writing one of the bestselling Warcraft novels of all time, Day of the Dragon, Richard A. Kaak is the author of the legendary fantasy series Dragonrealm that is “full of energy” (R. A. Salvatore, New York Times bestselling author of The Legend of Drizzt series). Now available in one fantastic collection, the first three novels from this riveting series include:

Firedrake: In the ultimate war between humans and fiery shape-shifting beings, Duke Toma has unleashed every conceivable evil upon the world of the Dragon Kings. Only one dares to challenge him: Cabe Bedlam, a youth with a magical sword that promises its bearer total mastery over man and beast alike.

Icedragon: Pitting his magic sword against the Dragon Kings’ glittering scaled armor, young Cabe Bedlam drove the shape-shifters back to their origins. But from the Northern Wastes, the merciless Ice Dragon implements a lethal scheme to sweep mankind into oblivion. Now Cabe must embark on a perilous journey toward epic confrontation.

Wolfhelm: The Death of the Dragon emperor leaves both the Dragonrealms and human kingdom in ruins. Tomorrow’s hope—the Emperor’s hatchlings—live, protected by the human warrior Cabe Bedlam. But the future teeters on the brink of disaster, and only Cabe and his good friend, the Gryohon, can save the dragons from losing their magic forever.

Richard A. Knaak is the New York Times and USA TODAY bestselling author of The Legend of Huma, World of Warcraft: Wolfheart, and nearly fifty other novels and numerous short stories, including “Black City Saint” and works in such series as Warcraft, Diablo, Dragonlance, Age of Conan, and his own Dragonrealm. He has scripted a number of Warcraft manga with Tokyopop, such as the top-selling Sunwell trilogy, and has also written background material for games. His works have been published worldwide in many languages. His most recent releases include Shade—a brand-new Dragonrealm novel featuring the tragic sorcerer—Dawn of the Aspects—the latest in the bestselling World of Warcraft series, and the fourth collection in his Legends of the Dragonrealm series. He is presently at work on several other projects.
Loading...
or support indie stores by buying on