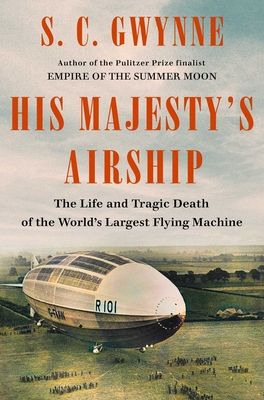 The Life and Tragic Death of the World's Largest Flying Machine

From the bestselling author of the Pulitzer Prize finalist Empire of the Summer Moon comes a stunning historical tale of the rise and fall of the world’s largest airship—and the doomed love story between an ambitious British officer and a married Romanian Princess at its heart.

The tragic story of the British airship R101—which went down in a spectacular hydrogen-fueled fireball in 1930, killing more people than died in the Hindenburg disaster seven years later—has been largely forgotten. In His Majesty’s Airship, historian S.C. Gwynne resurrects it in vivid detail, telling the epic story of great ambition gone terribly wrong.

Airships, those airborne leviathans that occupied center stage in the world in the first half of the twentieth century, were a symbol of the future. R101 was not just the largest aircraft ever to have flown and the product of the world’s most advanced engineering—she was also the lynchpin of an imperial British scheme to link by air the far-flung areas of its empire from Australia to India, South Africa, Canada, Egypt, and Singapore. No one had ever conceived of anything like this. R101 captivated the world. There was just one problem: beyond the hype and technological wonders, these big, steel-framed, hydrogen-filled airships were a dangerously bad idea.

Gwynne’s chronicle features a cast of remarkable—and often tragically flawed—characters, including Lord Christopher Thomson, the man who dreamed up the Imperial Airship Scheme and then relentlessly pushed R101 to her destruction; Princess Marthe Bibesco, the celebrated writer and glamorous socialite with whom he had a long affair; and Herbert Scott, a national hero who had made the first double crossing of the Atlantic in any aircraft in 1919—eight years before Lindbergh’s famous flight—but who devolved into drink and ruin. These historical figures—and the ship they built, flew, and crashed—come together in a grand tale that details the rocky road to commercial aviation written by one of the best popular historians writing today.