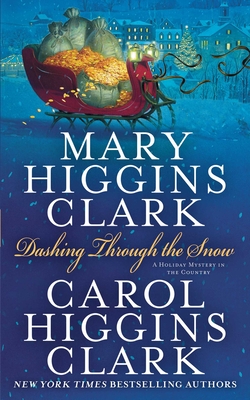 From the beloved mother-daughter duo of Mary Higgins Clark, America’s Queen of Suspense, and Carol Higgins Clark, author of the hugely popular Regan Reilly series, comes Dashing Through the Snow, a holiday treat loaded with as many surprises as Santa’s sleigh.

In picturesque Branscombe, New Hampshire, on the night before the village’s first (and many hope annual) Festival of Joy, a group of employees at the local market learn they have won $180 million in the lottery. But the one worker, Duncan, who decided at the last moment not to play, is nowhere to be found. And while a second winning ticket was purchased in the next town, that winner hasn’t come forward. Could Duncan have secretly bought it?

Alvirah Meehan, amateur sleuth, and private investigator Regan Reilly have arrived in town for the festival. And as they dig beneath the surface, they find that life in little Branscombe is not as tranquil as it appears. But while Alvirah and Regan have to put aside their visions of an old-fashioned weekend in the country, this fast-paced holiday caper is sure to keep you dashing through the pages.

Carol Higgins Clark is the author of the bestselling Regan Reilly mysteries. She is coauthor, along with her mother, Mary Higgins Clark, of a bestselling holiday suspense series. Also an actress, Carol Higgins Clark studied at the Beverly Hills Playhouse and has recorded several novels. She received AudioFile’s Earphones Award of Excellence for her reading of Jinxed. She lives in New York City. Her website is CarolHigginsClark.com.
Loading...
or support indie stores by buying on
(This book is on backorder)