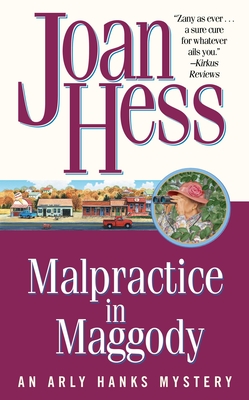 In Malpractice in Maggody, Joan Hess’s sixteenth book in the Maggody series, a murderer plagues the star-studded rehab center in a case that only sheriff Arly Hanks can crack.

Apart from small-town feuds and church scandal, things have been so quiet in the little Arkansas town of Maggody that even police chief Arly Hanks has found time for a vacation. But she returns to find trouble brewing and tongues wagging at fever pitch. The local old-folks’ home has been sold to a mysterious outsider, and overnight the place has been transformed into the Stonebridge Foundation, an exclusive rehabilitation center complete with a stone-faced guard who doesn’t speak a word of English and an even nastier dog. Soon there are rumors flying of mental patients roaming the countryside at night, and every character in town is keeping a gun close at hand, just in case. Everyone is dying to know what goes on behind those inhospitable gates, with the exception of Arly, who has enough rural business to keep her satisfied.

When the beautiful young receptionist found drowned in the garden pool is identified as a local girl from nearby Farberville, it’s clear the case may not only involve the suspicious characters who’ve recently moved to town, but also some of the citizens of Maggody, who may have a secret or two to hide themselves. There’s the doctor who can’t resist a dose of his own medicine and a roster of patients that reads like a who’s who of tabloid headlines, as well as the local pastor who gets his spiritual inspiration with a little help from the sacramental wine, and the mayor’s wife who makes it her business to know everything about everyone. Soon Arly finds herself on the trail of a killer and discovers she may be the only innocent person left in town.

Joan Hess is the author of the critically acclaimed Maggody mysteries, including Muletrain to Maggody, Maggody and the Moonbeams, Misery Loves Maggody, and Murder@Maggody.com, nominated for the prestigious Nero Wolfe Award. She has received numerous awards, including the American Mystery Award, the Agatha Award, the Drood Review Readers' Award, and the Macavity Award. A former president of the American Crime Writers League, she is currently president of the Arkansas Mystery Writers Alliance, as well as a member of Sisters in Crime. Joan Hess lives in Fayetteville, Arkansas.
Loading...
or support indie stores by buying on