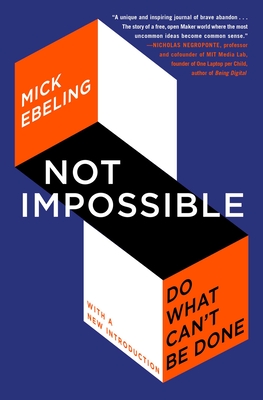 Do What Can't Be Done

Discover the “road map to changing your life by changing the lives of others” (Jillian Michaels, New York Times bestselling author) with the eye-opening and inspirational story of how one person—a film producer by trade and an optimist by nature—accidentally realized that no problem is unsolvable with a little bit of DIY.

As an enthusiastic participant in the Maker Movement, Mick Ebeling has found countless ways to create new, simple, do-it-yourself technologies. But Ebeling has always dreamed big and soon realized that by ignoring that little voice of doubt in his head, his hobby could have the potential to actually help people surmount seemingly impossible odds. From crafting prosthetics for a young Sudanese boy who lost his hands in a bombing to a machine that allowed a paralyzed artist to draw again, Ebeling soon saw that nothing is actually impossible.

Now, he shares his fascinating accomplishments including the creation of the Eyewriter—a device that tracks eye movements and translates them onto a screen, allowing them to be painted on a canvas or printed into a 3D sculpture.

A true testament to the power of determination, Not Impossible is the launching pad for you to uncover your abilities to change the world, too. Bursting with optimism and new ideas, “this is the template for a new science of consciousness. Mick Ebeling sees impossible just as a word for something not yet done. Read his book. Think like him. Then do the impossible” (Deepak Chopra).

Praise For Not Impossible: Do What Can't Be Done…

“A unique and inspiring journal of brave abandon. Mick's journey, along the thin border between naivete and genius, becomes a cautionary tale about caution itself – and how to learn to abandon it. It is the story of a free, open, maker world where the most uncommon ideas become common sense.”
— Nicholas Negroponte, Professor and Co-Founder of MIT Media Lab, Founder of One Laptop per Child, Author of Being Digital

“This is the template for a new science of consciousness. Mick Ebeling sees impossible just as a word for something not yet done. Read his book. Think like him. Then do the impossible.”
— Deepak Chopra

“Not Impossible is a masterful achievement: A road map to changing your life by changing the lives of others. The inspirational tales in this book show how to toss of old ways of thinking and look at the world from a new perspective. Mick has found a way to do just that.”
— Jillian Michaels

Raised in a family of entrepreneurs and philanthropists, Mick Ebeling is founder of the Not Impossible Foundation, a nonprofit organization that develops creative solutions to real-world problems, as well as The Ebeling Group, an international production company and creative think tank, representing some of the world’s leading design and directing collectives. He lives in Los Angeles with his wife, Caskey, and three children.
Loading...
or support indie stores by buying on