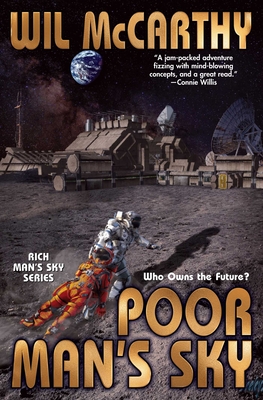 THE LUNAR MONASTERY TAUGHT PEOPLE HOW TO LIVE IN SPACE . . . AND THEN ONE OF ITS STUDENTS WAS MURDERED

Who owns the future?

Homicide detective Raimy Vaught is a losing contestant in the biggest reality show ever: the colonization of Mars. Brother Michael is a Benedictine monk who just wants to help the future happen. Andrei Bykhovski is an asteroid miner desperately escaping indentured servitude. Bridget Tobin is a hydroponic farmer studying the greenhouses of Luna.

But when a fellow Mars contestant drops dead at a Lunar monastery, these four souls will find themselves on a collision course with forces far beyond the control of trillionaires or nation states. As labor disputes erupt across cislunar space, the actions of individual people will determine whose future will prevail . . . and whose will perish.

“Wil McCarthy’s skill at crafting a believable, deeply science-grounded future is on full display. He brings us the mother of all locked-room mysteries wrapped in a vision of lunar colonization that rings a bit more true than we might be comfortable with. Small, gritty moments of inspired futurism pepper Poor Man’s Sky and remind us that no matter where we go, our human nature follows.” —Kimberly Unger, author of The Extractionist and Nucleation

“An action-crammed story that darts at hyper-speed from Burning Man, Nevada, to Suriname to a convent on the Moon to an orbiting colony that’s clearly up to something. A jam-packed adventure fizzing with mind-blowing concepts, and a great read!” —Connie Willis

About Antediluvian:
“. . . gripping and . . . grounded in archaeology.” —Publishers Weekly

“. . . plenty of verisimilitude . . . superbly intriguing and captivating . . . bravura historical recreations, full of conjectural material. . . . Presenting us with a colorful cast of characters from across the millennia who have thick and rich existences, and affirming that the cosmic stream of life flows forcefully despite all small blockades, McCarthy has written a novel that looks both forwards and backwards, thus making a stellar return to the field.” —Locus

About Wil McCarthy:
“McCarthy is an entertaining, intelligent, amusing writer, with Heinlein’s knack for breakneck plotting and, at the same time, Clarke’s thoughtfulness.” —Booklist