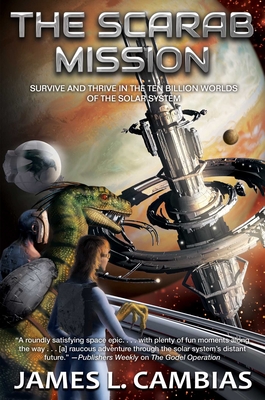 The Scarab Mission (The Billion Worlds #2)

A scavenger and her oddball crew are catapulted into the midst of a strange secret at the heart of a derelict colony ship among the Billion Worlds of the Tenth Millennium in a new novel of explosive SF from James L. Cambias.

Solana Sina is a scarab, salvaging wrecked and abandoned space habitats among the Billion Worlds of the Tenth Millennium. She and an oddball crew—a raven, a cyborg, and a dinosaur—board the derelict colony Safdaghar hoping to score some loot before the colony gets catapulted into the outer reaches of the Solar System. But Solana and the scarabs come face-to-face with a gang of vicious pirates looking for slaves and treasure, and a mysterious stranger intent on preserving an explosive secret. Solana must overcome her own horrifying past to survive and escape before it’s too late. But there’s an even more dangerous threat lurking in the dark passages and ruined buildings of Safdaghar . . .

About The Godel Operation:
“With this freewheeling story of an ancient, cunning artificial intelligence and its naïve human companion, Cambias (The Initiate) mashes humor, mystery, and looming apocalypse into a roundly satisfying space epic. . . . With plenty of fun moments along the way, this raucous adventure through the solar system’s distant future will appeal to any fan of lighter science fiction.” —Publishers Weekly

“Cambias makes his solar system feel very alive, with wildly different cultures on different planets and moons . . . It is far-future space opera that is astronomically contained and written with a lightning bolt.” —Warped Factor

Praise for Arkad's World:
“Far-flung adventure . . . Cambias offers up an entertaining coming-of-age novel filled with action and surprises. His aliens are suitably non-human in mannerisms, attitudes, and objectives, and his worldbuilding suggests a vast universe ready for further exploration. Readers . . . will find this hits the spot.” —Publishers Weekly

“. . . a classic quest story, a well-paced series of encounters with different folk along the way, building momentum toward a final confrontation with Arkad’s past . . . [with] a delicious twist to the end.” —ALA Booklist

“Cambias has achieved a feat of world-building: an expansive, believable setting with fascinating aliens, compelling mysteries, and a rich sense of history.” —Bookpage

“Drop a teenage boy into a distant planet chock-full of colorful aliens—with troubles all their own. Stir, flavor, apply heat. A tour de force in the field, and great, quick fun.” —Gregory Benford

Praise for the work of James L. Cambias:
“Beautifully written, with a story that captures the imagination the way SF should.” —Booklist starred review

James L. Cambias is a writer, a game designer, and the cofounder of Zygote Games. He has been nominated for the James Tiptree Jr. Award and the 2001 John W. Campbell Award for Best New Writer. He lives in western Massachusetts.
Loading...
or support indie stores by buying on
(This book is on backorder)