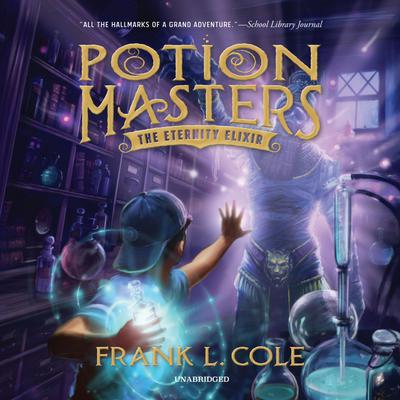 Twelve-year-old Gordy Stitser is one of the few people who knows the truth about the secret society of potion masters, because not only is Gordy’s mom on the Board of Ruling Elixirists Worldwide (BREW), but she has also been training Gordy in the art of potion-making.

Gordy is a natural, and every day he sneaks down to the basement lab to invent new potions using exotic ingredients like fire ant eggs, porcupine quills, and Bosnian tickling juice.

One afternoon, Gordy receives a mysterious package containing an extremely rare potion known as “The Eternity Elixir.” In the right hands, the Elixir continues to protect society. But in the wrong hands, it could destroy the world as we know it.

Now, sinister potion masters are on the hunt to steal the Eternity Elixir. It’s up to Gordy, his parents, and his best friends, Max and Adeline, to prevent an all-out potion war.

Frank L. Cole is the author of several books and an active promoter of reading and using your imagination. His philosophy is "With a good imagination you can solve any problem you ever come up against in life!" Cole lives with his wife and three children out West, and when he's not writing books, he enjoys going to the movies and traveling.