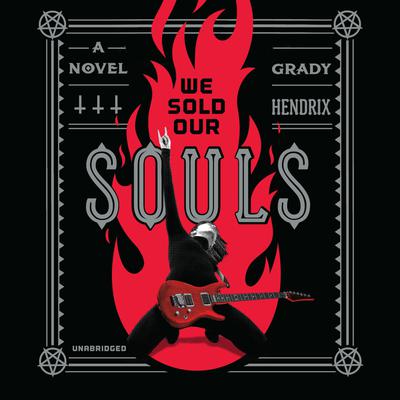 We Sold Our Souls (Digital Audiobook)

In this hard-rocking, spine-tingling supernatural thriller, the washed-up guitarist of a ’90s heavy metal band embarks on an epic road trip across America and deep into the web of a sinister conspiracy.

Grady Hendrix, horror writer and author of Paperbacks from Hell and My Best Friend’s Exorcism, is back with his most electrifying novel yet. In the 1990s, heavy metal band Dürt Würk was poised for breakout success—but then lead singer Terry Hunt embarked on a solo career and rocketed to stardom as Koffin, leaving his fellow bandmates to rot in obscurity.

Two decades later, former guitarist Kris Pulaski works as the night manager of a Best Western—she’s tired, broke, and unhappy. Everything changes when a shocking act of violence turns her life upside down, and she begins to suspect that Terry sabotaged more than just the band.

Kris hits the road, hoping to reunite with the rest of her bandmates and confront the man who ruined her life. It’s a journey that will take her from the Pennsylvania rust belt to a celebrity rehab center to a music festival from hell. A furious power ballad about never giving up, even in the face of overwhelming odds, We Sold Our Souls is an epic journey into the heart of a conspiracy-crazed, pill-popping, paranoid country that seems to have lost its very soul … where only a lone girl with a guitar can save us all.

Grady Hendrix is
a writer and journalist and one of the founders of the New York Asian Film
Festival. A former film critic for the New
York Sun
, Grady has written for Slate,
the Village Voice, Time Out New York, Playboy, and Variety.