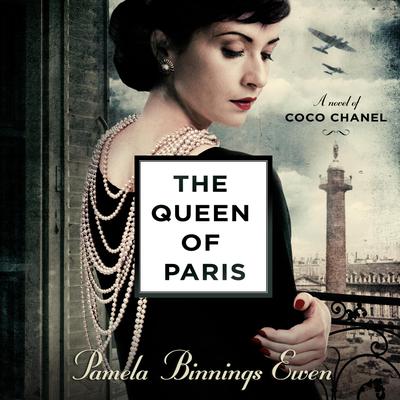 The Queen of Paris (Digital Audiobook)

A Novel of Coco Chanel

Legendary fashion designer Coco Chanel is revered for her sophisticated style—the iconic little black dress—and famed for her intoxicating perfume Chanel No. 5. Yet behind the public persona is a complicated woman of intrigue, shadowed by mysterious rumors. The Queen of Paris, the new novel from award-winning author Pamela Binnings Ewen, is fiction based on facts, some uncovered only within the past few years, and vividly imagines the hidden life of Chanel during the four years of Nazi occupation in Paris in the midst of WWII.

Coco Chanel could be cheerful, lighthearted, and generous; she also could be ruthless, manipulative, even cruel. Against the winds of war, with the Wehrmacht marching down the Champs-Élysées, Chanel finds herself residing alongside the Reich’s High Command in the Hotel Ritz. Surrounded by the enemy, Chanel wages a private war of her own to wrestle full control of her perfume company from the hands of her Jewish business partner, Pierre Wertheimer. With anti-Semitism on the rise, he has escaped to the United States with the confidential formula for Chanel No. 5. Distrustful of his intentions to set up production on the outskirts of New York City, Chanel fights to seize ownership. The House of Chanel shall not fall.

While Chanel struggles to keep her livelihood intact, Paris sinks under the iron fist of German rule. Chanel—a woman made of sparkling granite—will do anything to survive. She will even agree to collaborate with the Nazis in order to protect her darkest secrets. When she is covertly recruited by Germany to spy for the Reich, she becomes Agent F-7124, code name: Westminster. But why? And to what lengths will she go to keep her stormy past from haunting her future?

Pamela Binnings Ewen is the author of one nonfiction book, Faith on Trial, and five novels, including The Moon in the Mango Tree, awarded the 2012 Eudora Welty Memorial Award. After practicing law for many years, she retired to write. She is a founder of the Northshore Literary Society in St. Tammany Parish, Louisiana, in the greater New Orleans area. She’s also served on the boards of the Pirate’s Alley Faulkner Society and Tennessee Williams Festival. Visit Pamela at PamelaEwen.com.