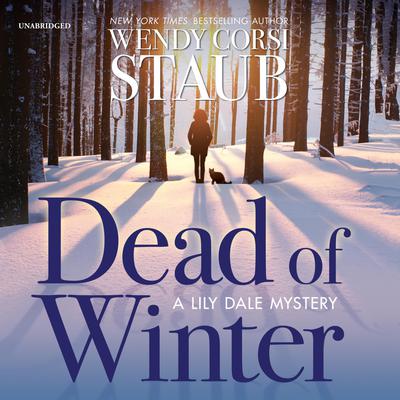 Just as a murderer dumps his corpse into the lake across Valley View in Lily Dale, Bella Jordan happens to be at her window, not quite realizing what she’s seeing. Unbeknownst to her, the killer spots her silhouette and prowls straight to her door. That is, until he’s interrupted by a black cat. A superstitious gambler, he takes off, but Bella’s seen too much, and he vows to return.

Jiffy Arden, a neighborhood kid looking for the black cat and stumbling across the killer, begins to have premonitions of being kidnapped during the season’s first snowstorm. Sure enough, when it strikes, he vanishes, never arriving home from the bus stop. While her son, Max, believes Jiffy has been kidnapped, Bella is convinced he’s just wandered off as he typically does … until a body shows up in the lake.

Now everyone is pulling out all the stops to find the missing child, identify the victim, and collar the killer. And fast, because he’s coming for Bella next in Dead of Winter.

Wendy Corsi Staub is the New York Times and USA Today bestselling author of more than seventy-five novels. Renowned for her tales of suspense, she has twice been nominated for the Simon & Schuster Mary Higgins Clark Award and is the recipient of the prestigious Rita Award, as well as numerous other awards. She lives in the New York City suburbs with her husband of more than twenty years and their two children.