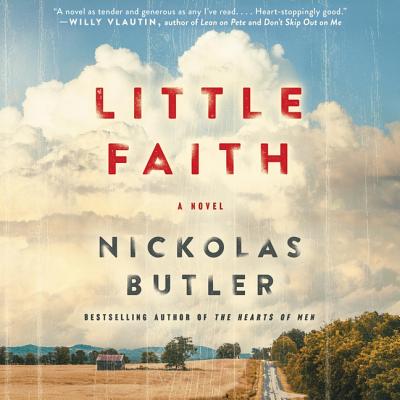 “I loved this story about friendship, family, and how faith influences life-changing decisions. Nickolas Butler beautifully captures the people, landscape, and seasons of northern Wisconsin over a 12-month period. The characters and their relationships to each other is what this book is really about. You will love or hate them, but you will feel part of this community when you finish.”
— Susan Murphy, Pages Bookshop, Detroit, MI
View the List

In this moving new novel from celebrated author Nickolas Butler, a Wisconsin family grapples with the power and limitations of faith when one of their own falls under the influence of a radical church.

Lyle Hovde is at the onset of his golden years, living a mostly content life in rural Wisconsin with his wife, Peg, daughter, Shiloh, and six-year old grandson, Isaac. After a troubled adolescence and subsequent estrangement from her parents, Shiloh has finally come home. But while Lyle is thrilled to have his whole family reunited, he's also uneasy: in Shiloh's absence, she has become deeply involved with an extremist church, and the devout pastor courting her is convinced Isaac has the spiritual ability to heal the sick.

While reckoning with his own faith--or lack thereof--Lyle soon finds himself torn between his unease about the church and his desire to keep his daughter and grandson in his life. But when the church's radical belief system threatens Isaac's safety, Lyle is forced to make a decision from which the family may not recover.

Set over the course of one year and beautifully evoking the change of seasons, Little Faith is a powerful and deeply affecting intergenerational novel about family and community, the ways in which belief is both formed and shaken, and the lengths we go to protect our own.