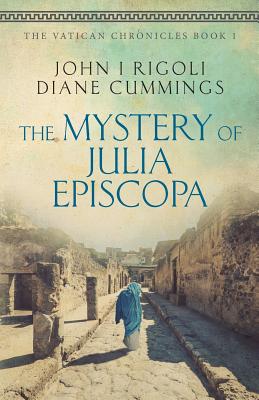 The Mystery of Julia Episcopa

In ancient Rome, a woman flees for her life.

Her enemies are those she once called 'brother'. Hidden beneath her blue cloak are secrets men will kill for - forgeries that prove the newly self-appointed bishops are not followers of the way, but pretenders who have seized power and will stop at nothing to shape this new religion to their own ends.

Now, Julia - a woman who had once walked with Mary Magdalene and taught alongside Paul must preserve the legacy of the apostles in the face of terrifying danger.

Two thousand years later, classical archaeologists Valentina Vella and Erika Simone stumble across an ancient parchment buried deep in the Vatican archives, a document that has clearly been altered. They find themselves on the trail of a woman who may have been the first woman Bishop in the Catholic faith.

To reveal Julia's legacy will put them in the cross-hairs of a venomous Vatican battle for power and supremacy; to stay silent would make them complicit in an ancient heresy and would betray the teachings that Julia sacrificed her life to defend.

'The Mystery of Julia Episcopa' weaves seamlessly between modern day Rome and the politics of the Catholic church, and the times and life of a 1st century Roman noblewoman who rose to be a dominant force in the early Christian movement.

John Ignatius Rigoli's experiences as both a cradle Catholic and former US Naval officer informed his world view in a rather unexpected manner, opening his eyes to the proposition that those who seek power are the last people who should hold it. John is an unabashed social justice advocate, outspoken liberal, and a patriot - and he sees no dichotomy in this. As a talented and inquisitive amateur historian, John became interested in the stories of the earliest women in the Church. Diane Cummings is a California girl, a UCLA alum, and is currently sweating in Atlanta, Georgia, with the world's smallest Persian cat. Diane has worked as a radio reporter and a TV news director. Deciding that truth was too much stranger than fiction, she turned in her microphone and press pass and set about applying her passion for writing and editing to the world of literature. Diane has edited or ghostwritten more than 50 titles - and now she wants her name on the cover. The Vatican Chronicles Trilogy has encompassed six years of research and writing, and she hopes you enjoy Book 1 - The Mystery of Julia Episcopa as much as she has enjoyed writing it.
Loading...
or
Not Currently Available for Direct Purchase