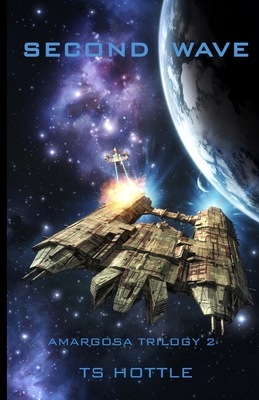 Amargosa is under Gelt occupation. But a fallen starship may hold the key to liberating the planet. JT Austin, Davra Andraste, and Eric Yuwono disobey orders to reach this ship. Along the way, they discover that not every enemy is Gelt, not every ally is human, and that another intelligence may live on Amargosa.

TS Hottle is a science fiction writer originally from Cleveland. By night, he writes, cooks, golfs, plays video games with his future stepson, and fights with a cat named Tearyon. By day, he is a software developer. Sometimes, he wins against the cat, but not often. For fifteen years, he wrote crime fiction under the name Jim Winter. Now he has returned to his first love, science fiction He has created The Compact Universe, a series of loosely connected space opera tales centered around humans' disastrous first contact with a species known as the Gelt. He lives in the Cincinnati suburb of Deer Park with his fiancee Candy and her son. When not writing or cooking, they both can be found fixing up their newly purchased Cape Cod. Which has a deck. Which makes TS very happy.
Loading...
or support indie stores by buying on