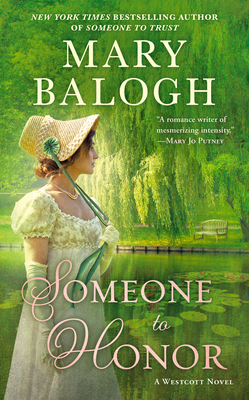 Someone to Honor (The Westcott Series #6) (Mass Market)

Abigail Westcott's dreams for her future were lost when her father died and she discovered her parents were not legally married. But now, six years later, she enjoys the independence a life without expectation provides a wealthy single woman. Indeed, she's grown confident enough to scold the careless servant chopping wood outside without his shirt on in the proximity of ladies.

But the man is not a servant. He is Gilbert Bennington, the lieutenant colonel and superior officer who has escorted her wounded brother, Harry, home from the wars with Napoleon. Gil has come to help his friend and junior officer recover, and he doesn't take lightly to being condescended to--secretly because of his own humble beginnings.

If at first Gil and Abigail seem to embody what the other most despises, each will soon discover how wrong first impressions can be. For behind the appearances of the once-grand lady and the once-humble man are two people who share an understanding of what true honor means, and how only with it can one find love.

Mary Balogh has written more than one hundred historical novels and novellas, more than thirty of which have been New York Times bestsellers. They include the Bedwyn saga, the Simply quartet, the Huxtable quintet, the seven-part Survivors' Club series, and the Westcott series.

Praise For Someone to Honor (The Westcott Series #6)…

Praise for Someone to Honor

“A strong, compassionate heroine and a hero who learns to appreciate his worth discover the true meaning of love in this tender, perceptive, and infinitely entertaining romance that delightfully continues the saga of the unconventional Westcotts.”—Library Journal (starred review)

“…Poignant, heartrending, hopeful, and quietly profound, the latest exquisitely written installment in Balogh’s Regency Westcott series is another sure bet for the author’s legion of fans as well as an excellent introduction for new readers to Balogh’s effortlessly elegant and superbly romantic brand of literary magic.”—Booklist (starred review)
or support indie stores by buying on
Copyright © 2020 American Booksellers Association