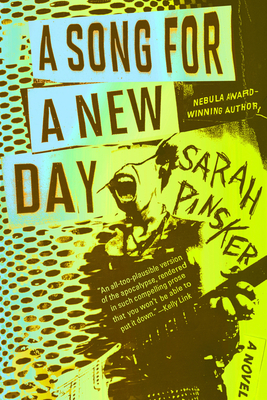 A Song for a New Day

WINNER OF THE NEBULA AWARD

After a global pandemic makes public gatherings illegal and concerts impossible, except for those willing to break the law for the love of music—and for one chance at human connection.

In the Before, when the government didn't prohibit large public gatherings, Luce Cannon was on top of the world. One of her songs had just taken off and she was on her way to becoming a star. Now, in the After, terror attacks and deadly viruses have led the government to ban concerts, and Luce's connection to the world--her music, her purpose—is closed off forever. She does what she has to do: she performs in illegal concerts to a small but passionate community, always evading the law.

Rosemary Laws barely remembers the Before times. She spends her days in Hoodspace, helping customers order all of their goods online for drone delivery—no physical contact with humans needed. By lucky chance, she finds a new job and a new calling: discover amazing musicians and bring their concerts to everyone via virtual reality. The only catch is that she'll have to do something she's never done before and go out in public. Find the illegal concerts and bring musicians into the limelight they deserve. But when she sees how the world could actually be, that won’t be enough.

Praise For A Song for a New Day…

“This is an amazing story about music, finding oneself and one’s purpose, while at the same time, touching on many of the issues that we are starting to see in everyday life, the addiction to devices, in particular. … The characters are strong and likeable, the descriptions of places where people play are vivid and detailed. A book I highly recommend!”—The Nerd Daily

“A Song For a New Day is amazing. Pinsker has one of the strongest voices for character in fiction today; everything her characters do is compelling. Pinsker accomplishes a scary look at a future and still gives us comfort within it. She helps us remember that the world isn't over yet, after all.”—Mur Lafferty, author of Six Wakes

“Woven through Pinsker’s meticulously crafted future of technology-enabled isolation and corporate-consumerist powerlessness is a stirring anthem against the politics of fear. A dazzling tale told in multiple voices, with not a single note out of place. This is the lyrical protest song that we have always needed, perhaps more so now than ever.”--Ken Liu, author of The Grace of Kings

“Sarah Pinsker shares an unsparing vision of a near-future world only a few degrees removed from our own, but has the nerve and audacity to leaven the darkness with hope.  A powerful novel whose unforgettable characters channel humanity’s true superpowers: art and the act of creation. “ —  Elizabeth Hand, author of Curious Toy and Generation Loss

“A Song for a New Day is a compulsively readable story about music, freedom, taking chances, and living with your past. I meant to read it slowly, savoring Pinsker's near-future world-building and her perfect descriptions of performance, but I ended up gulping it down, so eager to see what happens next for Luce and Rosemary, each brave and resourceful in her own way.”—Kij Johnson, author of The Dream-Quest of Vellitt Boe

"Sarah Pinsker plays genre like a favorite guitar, and I am in awe of her talents. How can a writer so new be so central, so necessary?”—Andy Duncan, author of An Agent of Utopia

“A full-throated call to arms in the service of music, creation, and shared experience, A Song for a New Day resists both extremes and easy tropes, offering hope in the face of catastrophe through the engrossing stories of characters you'll want to spend more time with.”—Malka Older, author of Infomancy

“Let freedom ring in the growl of an angry guitar chord! Sarah Pinsker’s A Song For a New Day is an absorbing tale of a quiet, all-too-believable American dystopia in which a passion for music becomes the secretive, surprising seed of rebellion.”—Linda Nagata, Nebula Award winning author of The Last Good Man

"A Song for a New Day is a must-read from a new voice you won't forget."--Sam J Miller, author of Blackfish City

“A beautiful, complex debut collectoin… Pinsker’s captivating compendium reveals stories that are as delightful and surprising to pore through as they are introspective and elegiac.”—Publishers Weekly on Sooner or Later Everything Falls Into the Sea (Starred review)

“Pinsker has delivered a sturdy collection in the speculative tradition of Ursula K. Le Guin and Kelly Link but with her own indomitable voice front and center. An auspicious start to what promises to be one wild ride of a literary career.”—Kirkus Reviews on Sooner or Later Everything Falls Into the Sea

Sarah Pinsker's Hugo, Nebula, and Sturgeon Award-winning short fiction has appeared in Asimov's, F&SF, Uncanny, Strange Horizons, as well as numerous other magazines, anthologies, year's bests, podcasts, and translation markets. She is also a singer/songwriter who has toured nationally behind four albums on various independent labels. Her first collection, Sooner or Later Everything Falls Into the Sea, was released in early 2019 by Small Beer Press. This is her first novel. She lives with her wife in Baltimore, Maryland.
Loading...
or support indie stores by buying on