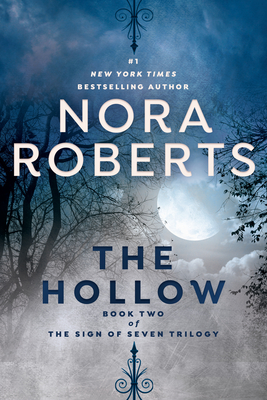 #1 New York Times bestselling author Nora Roberts continues the thrilling trilogy of a town plagued by evil—and the three men and three women brought together by fate to fight it.

For Fox, Caleb, Gage and the other residents of Hawkins Hollow, the number seven portends doom—ever since, as boys, they freed a demon trapped for centuries when their blood spilled upon The Pagan Stone…

Now, as the dreaded seventh month looms before them, the men can feel the storm brewing. Already they are plagued by visions of death and destruction. But this year, they are better prepared, joined in their battle by three women who have come to The Hollow. Layla, Quinn, and Cybil are somehow connected to the demon, just as the men are connected to the force that trapped it.

Since that day at The Pagan Stone, town lawyer Fox has been able to see into others’ minds, a talent he shares with Layla. He must earn her trust, because their link will help fight the darkness that threatens to engulf the town. But Layla is having trouble coming to terms with her newfound ability—and this intimate connection to Fox. She knows that once she opens her mind, she’ll have no defenses against the desire that threatens to consume them both…

Praise for Nora Roberts and The Hollow

“Roberts cleverly continues her deliciously chilling Sign of Seven trilogy with a riveting story that focuses on Fox and Layla, both of whose gift for reading other people’s minds plays a key role in the six’s demon-defeating plans.”—Booklist
or
Buy Here
Copyright © 2020 American Booksellers Association