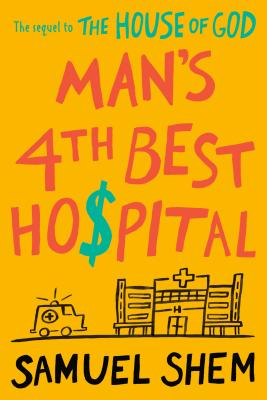 Years after the events of The House of God, the Fat Man has been given leadership over a new Future of Medicine Clinic at what is now only Man's 4th Best Hospital, and has persuaded Dr. Roy Basch and some of his intern cohorts to join him to teach a new generation of interns and residents. In a medical landscape dominated by computer screens and corrupted by money, they have one goal: to make medicine humane again.

What follows is a mesmerizing, heartbreaking, and hilarious exploration of how the health-care industry, and especially doctors, have evolved over the past thirty years.

"Darkly funny."—TIME Magazine's New Books You Should Read in November

"Shem has done it again. . . .So timely and relevant. You will get a little pissed-off, double over in laughter and even cry a little."—Sanjay Gupta, MD

“Samuel Shem has challenged generations of doctors in his writing to think deeply about why they chose medicine. His novels illuminate the humanistic core of clinical care, and serve as a bulwark against a system increasingly characterized by avarice and anonymity.”—Jerome Groopman, MD, author of How Doctors Think

“If you want to know why the doctor spends all visit looking at a computer instead of you, and if you want to know how the doctor feels about it, this is the book for you: a mordantly funny tour through modern medicine with a powerful prescription for how to change. “—Bill McKibben, bestselling author of The End of Nature and Radio Free Vermont

“As he did in The House of God, Samuel Shem provides a bitter, caustic and overdue update on the cold and bureaucratic world that awaits the sick and the dying if they are lucky enough to be able to afford it.”—Arthur Caplan, professor of Bioethics at New York University Langone Medical Center

“Oh my god! This book is brilliant enough to start a revolution. Dedicated nurses, doctors, and all haters of Electronic Medical Records unite! Together we must heed the Fat Man's call ‘to put the human back in health care.’"—Theresa Brown, RN, author of the New York Times bestseller The Shift: One Nurse, Twelve Hours, Four Patients' Lives

"Filled with unforgettable characters and the shocking reality of the many rackets running through the medical industry, this sobering yet hilarious satire manages to offer a glimmer of hope for putting humans back into health care.”—Booklist (starred review)

Samuel Shem is a novelist, playwright, and a member of the faculty of the New York University School of Medicine at NYU Langone Medical Center. His novels include The House of God, Mount Misery, Fine, and The Spirit of the Place. He is coauthor with his wife, Janet Surrey, of the hit Off-Broadway play Bill W. and Dr. Bob, the story of the founding of Alcoholics Anonymous (winner of the 2007 Performing Arts Award of the National Council on Alcoholism and Drug Dependence), and We Have to Talk: Healing Dialogues Between Men and Women.
Loading...
or
Not Currently Available for Direct Purchase