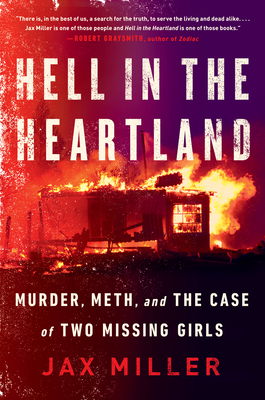 Hell in the Heartland

Murder, Meth, and the Case of Two Missing Girls

“There is, in the best of us, a search for the truth, to serve the living and dead alike...Jax Miller is one of those people and Hell in the Heartland is one of those books.”—Robert Graysmith, New York Times bestselling author of Zodiac

S-Town meets I'll Be Gone in the Dark in this stranger-than-fiction cold case from rural Oklahoma that has stumped authorities for two decades, concerning the disappearance of two teenage girls and the much larger mystery of murder, possible police cover-up, and an unimaginable truth...

On December 30, 1999, in rural Oklahoma, sixteen-year-old Ashley Freeman and her best friend, Lauria Bible, were having a sleepover. The next morning, the Freeman family trailer was in flames and both girls were missing.

While rumors of drug debts, revenge, and police corruption abounded in the years that followed, the case remained unsolved and the girls were never found.

In 2015, crime writer Jax Miller--who had been haunted by the case--decided to travel to Oklahoma to find out what really happened on that winter night in 1999, and why the story was still simmering more than fifteen years later. What she found was more than she could have ever bargained for: evidence of jaw-dropping levels of police negligence, entire communities ravaged by methamphetamine addiction, and a series of interconnected murders with an ominously familiar pattern.

These forgotten towns were wild, lawless, and home to some very dark secrets.

Praise For Hell in the Heartland: Murder, Meth, and the Case of Two Missing Girls…

“There is, in the best of us, a search for the truth, to serve the living and dead alike, an obsessiveness that means never giving up, to balance the scale and give the dead their due. In the modern tradition of I’ll be Gone in the Dark, Jax Miller is one of those people and Hell in the Heartland is one of those books.”—Robert Graysmith, New York Times bestselling author of Zodiac

"Harrowing, beautifully written, and filled with unexpected twists, readers won’t be able to put down this book until they reach the very last word. A new true-crime classic that is sure to engross fans of the genre."—Booklist

“A captivating ride through the frustrating twists, turns, and dead ends of a horrifying murder case…. This is as much an exploration of the underlying social issues that feed into a system of fear and violence as it is about the crime itself. A vivid storyteller, Miller proves herself as adept at nonfiction as fiction.”—Publisher's Weekly

“The title of Jax Miller’s book is, believe me, no exaggeration. This writer marched straight into a piece of Oklahoma that can fairly be called Hell and didn’t come out until she’d covered every track leading to and from an ice cold crime and relentlessly covered a whole lot of nasty possibilities.  Murder and Meth are only the beginning.”—Beverly Lowry, author of Who Killed These Girls?

“A top-notch true crime work shot through with desperation, paranoia, and regret. Reading this book feels like running headlong into danger, and Miller’s writing is haunted and haunting. It’s a patchwork of broken dreams, of secrets and lies, of trouble under the surface. Mesmerizing, raw, evocative, unforgettable.”—William Boyle, author of A Friend Is a Gift You Give Yourself

"Every generation has its standout true-crime writer. Jax Miller does with Hell in the Heartland what Truman Capote did with In Cold Blood. I've witnessed firsthand the extraordinary lengths Miller went to in order to investigate this case. She is without doubt a writer at the peak of her powers."—A.A. Dhand

"True crime fans who are fascinated by the dark side of rural life and police incompetence and open to a somewhat ambiguous ending will find much to savor.”—Library Journal

Jax Miller is an American author. While hitchhiking across America in her twenties, she wrote her first novel, Freedom's Child, for which she won the 2016 Grand Prix des Lectrices de Elle and earned several CWA Dagger nominations. She has received acclaim from the New York Times, NPR, Entertainment Weekly, and many more. She now works in the true-crime genre, having penned her much-anticipated book and acting as creator, host, and executive producer on the true-crime documentary series Hell in the Heartland on CNN's HLN network. Jax is a lover of film and music, and has a passion for rock 'n' roll and writing screenplays.
Loading...
or support indie stores by buying on