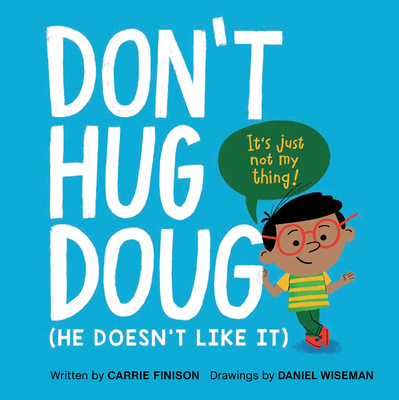 Meet Doug, an ordinary kid who doesn't like hugs, in this fun and exuberant story which aims to spark discussions about bodily autonomy and consent--from author Carrie Finison and the #1 New York Times bestselling illustrator of The World Needs More Purple People, Daniel Wiseman.

Doug doesn't like hugs. He thinks hugs are too squeezy, too squashy, too squooshy, too smooshy. He doesn't like hello hugs or goodbye hugs, game-winning home run hugs or dropped ice cream cone hugs, and he definitely doesn't like birthday hugs. He'd much rather give a high five--or a low five, a side five, a double five, or a spinny five. Yup, some people love hugs; other people don't. So how can you tell if someone likes hugs or not? There's only one way to find out: Ask! Because everybody gets to decide for themselves whether they want a hug or not.

Praise For Don't Hug Doug: (He Doesn't Like It)…

“A simple but effective lesson for children learning their own personal boundaries.” —TODAY

“Don’t Hug Doug can make kids feel better about their own boundaries, and challenge them to understand the comfort of others. But really, it gives grown-ups something to consider, too.” —Boston Globe

“It’s great to see . . . boundaries [of consent and personal autonomy] talked about, and Don’t Hug Doug does it in a way that’s both reinforcing and fun to read.” —The A.V. Club

* “A cheerful approach to basic consent . . . An excellent update on the golden rule: treat people how they want to be treated.” —Kirkus Reviews, starred review

“Simple and effective in showing young viewers how to establish bodily autonomy . . . A great starting point for a conversation about boundaries and how to set them.” —The Bulletin of the Center for Children's Books

“A fun way to deliver the truth of different strokes for different folks.” —Booklist

Carrie Finison writes poetry, stories, and books for kids. She is the author of the picture book Dozens of Doughnuts, illustrated by Brianne Farley. She lives outside Boston with her husband, their son, and their daughter, and two cats who allow her to work in their attic office. Visit the author at carriefinison.com and follow her on Twitter @CarrieFinison.

Daniel Wiseman is the #1 New York Times bestselling illustrator of The World Needs More Purple People by Kristen Bell and Benjamin Hart. He has illustrated many books for kids, including Goodbye Brings Hello by Dianne White, Play This Book by Jessica Young, When Your Lion Needs a Bath by Susanna Leonard Hill, and the Baby Scientist series by Laura Gehl. He lives with his family in Knoxville, Tennessee. Learn more at danieldraws.com or follow the artist on Instagram @d_wiseman.
Loading...
or support indie stores by buying on