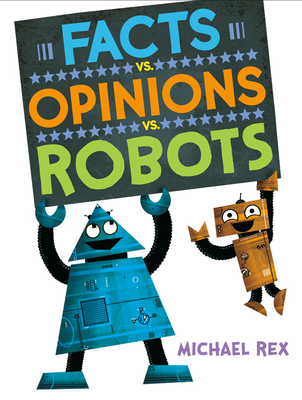 Facts vs. Opinions vs. Robots (Hardcover)

A hilarious, timely conversation about the differences between facts and opinions, by the creator of the #1 New York Times bestseller Goodnight Goon

Do you know the difference between a fact and an opinion? It can be a hard thing to understand. Some things are facts--like the number of robots in this book. Other things are opinions--like which robot would make the best friend, or which robot dances best. And sometimes to tell the difference between a fact and an opinion, you need to wait to get more information--that's because facts can be proven true or false, and opinions are things you feel and believe--but that you can't prove.

Mike Rex introduces young readers to the very important distinction between facts and opinions, and he reminds us that it is nice to listen to one another's opinions, and to stand up for the facts!

Michael Rex has written and/or illustrated over forty children's books, including Eat Pete,With Any Luck, I'll Drive a Truck (by David Friend), the New York Times #1 bestseller Goodnight Goon, The Runaway Mummy, Truck Duck, and the Fangbone series (which has also been turned into an animated TV series). He has a master's degree in visual arts education (K-12) and worked as a New York City art teacher for four years. He lives in Leonia, New Jersey, with his wife and their two sons.

Praise For Facts vs. Opinions vs. Robots…

* “Charismatic robots populate this primer for kids growing up in an era when facts are considered debatable and opinions are oft expressed loudly and without empathy. Rex tackles a very serious topic infrequently addressed in kids' books: how to tell the difference between provable facts and far-less-provable opinions. To do this, Rex employs a handful of colorful and chatty robot pals who run through enough examples to make the distinctions clear. . . . Via a series of reboots, the robots learn how to respect opinions and engage in compromise. It's a welcome use of skill-building to counter an information landscape filled with calls of ‘Fake news!’ and toxic online discourse. . . . Perhaps most importantly, Rex's robots demonstrate that in the absence of enough information, it's perfectly fine to wait before acting. Vital information for young media consumers; it couldn't be timelier.”—Kirkus Reviews, starred review

“'Do you know the difference between a fact and an opinion?' Rex (Eat Pete!) creates an essential picture book for the times, with a cast of digitally rendered robots as his eager-eyed, rambunctious object lessons. . . . He offers more tips. Listen to other opinions, reboot the dialogue, and find common ground. Rex and his robots ultimately make a fun, cogent argument for informed and civil conversation. These robots could teach grown-ups a thing or two.”—Publishers Weekly

“What a good idea! Show little ones how to tell facts from opinions—and do it with robots! The digital artwork features jaunty, colorful robots who bring up various topics and ask if they are fact or opinion. The colors of robots? That's a fact. . . . Which robot is more fun? That's an opinion. There are even questions, readers are shown, that can't be answered because more information is needed. The engaging robots, the simple text, the clean, crisp pages, and, of course, the question-and-answer format that gives young ones the chance to think and decide for themselves. . . . Parents, teachers, and librarians will find lots of uses for this, and even those working with somewhat older children can use it as a discussion starter.”—Booklist

“Starting with the basics of discerning facts from opinions, the discussion becomes surprisingly complex, as Rex explores the times when we have to wait for more information in order to claim something as a fact. Most important, he finishes up by explaining the importance of respecting the opinions of others. Rex’s word choice and sentence structure make this title ideal for a young audience, while his critical thinking questions and repetition of concepts ensure that this text will be a useful purchase for any teacher. Rex’s large, vibrant robots add whimsy to the discussion. Their goofy, solid-color frames pop against the white background, making it ideal for large group sharing. A must-buy.”—School Library Journal
or support indie stores by buying on
Copyright © 2020 American Booksellers Association