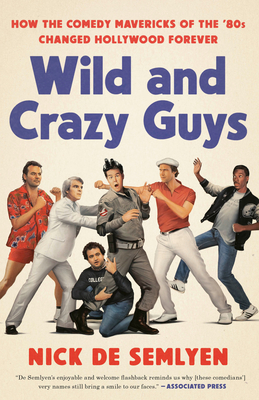 Praise For Wild and Crazy Guys: How the Comedy Mavericks of the '80s Changed Hollywood Forever…

“The definitive account of the golden age of American comedy—if it were any more addictive to read, these wild and crazy guys would probably have tried to snort it in the ’70s. Riveting.”—David Ehrlich, senior film critic, IndieWire

“Highly readable . . . pithy and propulsive . . . De Semlyen racks up the good anecdotes and behind-the-scenes tidbits.”—The Times (UK), “The Best Books So Far of 2019”

“There is no shortage of excellent critical writing about the US comedy scene in the 80s, and Nick de Semlyen’s Wild and Crazy Guys is a terrific contribution to the genre.”—The Guardian

“The irresistible Wild and Crazy Guys charts the roller-coaster ride of the groundbreaking comedy stars of the ’70s and ’80s, giving a fascinating look at the helium highs and crushing lows surrounding some of your favorite funny films. I couldn’t put it down. Although that may have been the glue.”—Edgar Wright, director of Shaun of the Dead, Hot Fuzz, and Baby Driver

“An authoritative look at how the creators of Saturday Night Live and the films that followed . . . changed the face of comedy.”—Leonard Maltin

“A master storyteller, de Semlyen weaves extensive research and interviews into an entertaining narrative [that] will resonate long after the last chapter. . . . Beautifully written and absorbing, this is a valuable addition to the chronicles of American comedic cinema.”—Library Journal (starred review)

“Bill Murray, Steve Martin, Eddie Murphy—they’re all here like you’ve never seen them before (with no shortage of drugs, competitiveness, and egos).Fast-paced and addictive, Wild and Crazy Guys is the Easy Riders, Raging Bulls of the wild and crazy ‘80s Hollywood comedy scene.”—Chris Nashawaty, author of Caddyshack: The Making of a Hollywood Cinderella Story

“It's amazing that anybody survived making comedies in the impulsive, excessive, drug-fueled, rage-filled period in the decade following the explosive arrival of Saturday Night Live. And some didn't. But, aided by the sharp recollections of those who did, Nick de Semlyen gives that more-is-more period of comedy what it desperately needs: Clarity and perspective. Wild and Crazy Guys maps the era and its swaggering players beautifully.”—Mark Harris, author of Pictures at a Revolution and Five Came Back

Nick de Semlyen is a film journalist who has written for publications including Rolling Stone, Stuff, and Time Out. He is the features editor for Empire, the world's biggest movie magazine.
Loading...
or
Not Currently Available for Direct Purchase