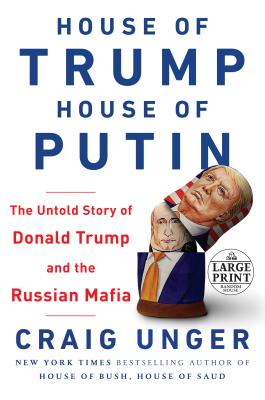 House of Trump, House of Putin
offers the first comprehensive investigation into the decades-long relationship among Donald Trump, Vladimir Putin, and the Russian Mafia that ultimately helped win Trump the White House.


It is a chilling story that begins in the 1970s, when Trump made his first splash in the booming, money-drenched world of New York real estate, and ends with Trump’s inauguration as president of the United States. That moment was the culmination of Vladimir Putin’s long mission to undermine Western democracy, a mission that he and his hand-selected group of oligarchs and Mafia kingpins had ensnared Trump in, starting more than twenty years ago with the massive bailout of a string of sensational Trump hotel and casino failures in Atlantic City. This book confirms the most incredible American paranoias about Russian malevolence.

Craig Unger is the author of seven books, including the New York Times bestsellers American Kompromat, House of Bush, House of Saud, and House of Trump, House of Putin. For fifteen years he was a contributing editor of Vanity Fair where he covered national security, the Middle East, and other political issues. A frequent analyst on MSNBC and other broadcast outlets, he was a longtime staffer at New York Magazine, has served as editor-in-chief of Boston Magazine, and has contributed to Esquire, The New Yorker, and many other publications. He also appears frequently as analyst on MSNBC, CNN, and other broadcast outlets. Unger has written about the Trump Russia scandal for The New Republic, Vanity Fair, and The Washington Post. He is a graduate of Harvard University and lives in Brooklyn, New York.
Loading...
or
Not Currently Available for Direct Purchase