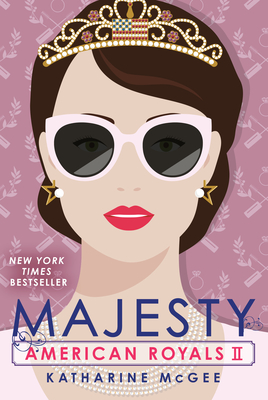 America has its first ever queen on the throne in this sequel to American Royals! If you can't get enough of Harry and Meghan and Will and Kate, you'll love this New York Times bestseller that imagines America's own royal family--and all the drama and heartbreak that entails. Crazy Rich Asians meets The Crown. Perfect for fans of Red, White, and Royal Blue and The Royal We.

Power is intoxicating. Like first love, it can leave you breathless. Princess Beatrice was born with it. Princess Samantha was born with less. Some, like Nina Gonzalez, are pulled into it. And a few will claw their way in. Ahem, we're looking at you Daphne Deighton.

As America adjusts to the idea of a queen on the throne, Beatrice grapples with everything she lost when she gained the ultimate crown. Samantha is busy living up to her "party princess" persona...and maybe adding a party prince by her side. Nina is trying to avoid the palace--and Prince Jefferson--at all costs. And a dangerous secret threatens to undo all of Daphne's carefully laid "marry Prince Jefferson" plans.

“With love and rivalries, a heady pre-wedding atmosphere, and a country's future poised to change, American Royals II: Majesty is an indulgently fun escape.” —Shelf Awareness

“Imagine a world where Meghan Markle is the queen of the United States of America…. American Royals is the next closest thing.” –Teen Vogue

"For all the glamour and intrigue, there's also a reality check. All four central characters struggle to reconcile the expectations the world imposes on them with the internal selves they discover through heartbreak and struggle." —The New York Times Book Review

“A soapy, escapist blockbuster [following] the drama, scandal and romances of the impossibly glamorous young court. An unabashedly frothy romp, and enormous fun." –The Guardian

A fun, fast-paced read packed with drama, scandal, and romance” –The Sun

"Critical questions tantalize readers through the foibles and flaws of characters who are frustratingly human… readers will eagerly await the next installment to find out whether true love will win or stodgy tradition will triumph.” —Kirkus Reviews

“A deliciously soapy American royal family… McGee’s characters are well-crafted and flawed, giving the narrative emotional texture that elevates it above the dramatic formula.” —Publishers Weekly

“Readers will be hooked…. A fun twist on history as we know it, and the ending will have readers hoping for a sequel.” —School Library Journal

“For readers looking for intrigue—and for those who like their royal fever with a twist—this is a quick and delicious read.” —Booklist

Katharine McGee is the New York Times bestselling author of the American Royals series and the Thousandth Floor trilogy. She studied English and French literature at Princeton University and has an MBA from Stanford. She now lives in Houston with her husband. Visit her online at katharinemcgee.com. Follow her at @katharinemcgee.
Loading...
or support indie stores by buying on