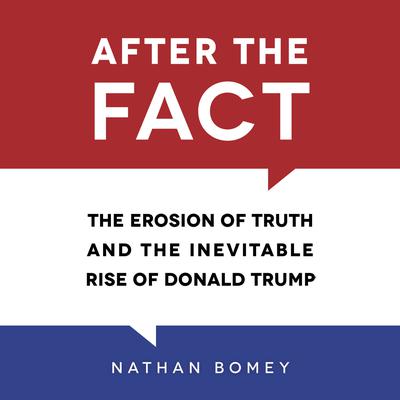 After the Fact (Digital Audiobook)

The Erosion of Truth and the Inevitable Rise of Donald Trump

This trenchant analysis examines the many ways our society's increasingly tenuous commitment to facts laid the groundwork for Donald Trump's rise to power.

Award-winning journalist Nathan Bomey argues that Trump did not usher the post-truth era into being. He was its inevitable outcome. Bomey points to recent trends that have created the perfect seedbed for spin, distortion, deception, and bald-faced lies: shifting news habits, the rise of social media, the spread of entrenched ideologies, and the failure of schools to teach basic critical-thinking skills

The evidence supporting the author's argument is all around us: On Facebook, we present images of our lives that ignore the truth and intentionally deceive our friends and family. We consume fake news stories online and carelessly circulate false rumors. In politics, we vote for leaders who leverage political narratives that favor ideology over science. And in our schools, we fail to teach students how to authenticate information.

After the Fact explores how the convergence of technology, politics, and media has ushered in the misinformation age, sidelining the truth and threatening our core principle of community.

NATHAN BOMEY is an award-winning business reporter for USA Today and the author of Detroit Resurrected: To Bankruptcy and Back. Previously, he was a reporter for the Detroit Free Press, a business reporter for publications in Ann Arbor, Mich., and a reporter for his hometown newspaper in Saline, Mich. Among other honors, Bomey has received the Michigan Notable Books Award (2017) from the Michigan Department of Education, the Outstanding Young Alumni Award (2015) from Eastern Michigan University, the Young Journalist of the Year Award (2015) from the Society of Professional Journalists Detroit, two Society of American Business Editors and Writers (SABEW) Awards, the Wade H. McCree Award for the Advancement of Justice, and Governing magazine's Hovey-Harkness Award, honoring the best public service journalism on government issues.