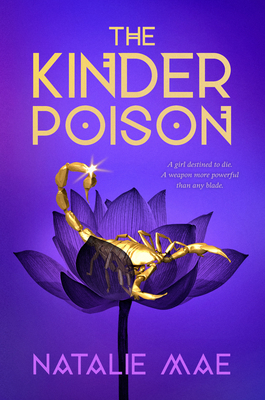 Perfect for fans of Victoria Aveyard and Holly Black, The Kinder Poison is an enthralling fantasy adventure that follows a teenage girl chosen to be the human sacrifice in a deadly game between three heirs who will do anything for the crown.

Zahru has long dreamed of leaving the kingdom of Orkena and having the kinds of adventures she's only ever heard about in stories. But as a lowly Whisperer, her power to commune with animals means that her place is serving in the royal stables until the day her magic runs dry.

All that changes when the ailing ruler invokes the Crossing. A death-defying race across the desert, in which the first of his heirs to finish—and take the life of a human sacrifice at the journey's end—will ascend to the throne. With all of the kingdom abuzz, Zahru leaps at the chance to change her fate if just for a night by sneaking into the palace for a taste of the revelry. But the minor indiscretion turns into a deadly mistake when she gets caught up in a feud between the heirs and is forced to become the Crossing's human sacrifice.

Now Zahru's only hope for survival hinges on the impossible: somehow figuring out how to overcome the most dangerous people in the world.

Praise For The Kinder Poison…

★ "Mae has crafted a fascinating world with a unique magic structure that is wholly believable because of the vibrant characters within it. With characters to love, to hate, and to love to hate, plus a plot full of adventure skillfully woven with suspense, this is a must-purchase for all YA collections." —School Library Journal, starred review

★ "Zahru’s unexpectedly humorous inner voice, the rich worldbuilding full of political intrigue, a slow-burning romance, and a fantastic set of well-developed characters (both friends and foes) mark this exciting and refreshing tale of power and accountability. A funny, rewarding story for fans of optimistic tales with a bite." —Kirkus, starred review

“The Kinder Poison delivers a deadly dose of danger and ancient magic in a cleverly penned fantasy, perfect for fans of An Ember in the Ashes or Three Dark Crowns. Like a coiled snake, it’s full of wicked surprises.” —Colleen Oakes, bestselling author of the Queen of Hearts series

“The Kinder Poison is a heartfelt, magical tale that swept me away like a desert storm.” —Brenda Drake, New York Times bestselling author of Thief of Lies

“A captivating tale of duty versus dreams, woven through with a unique system of magic and a push-pull romance that will have you demanding the sequel. Magically seductive!” —Lori Goldstein, author of Screen Queens and Becoming Jinn

“The best fantasy I’ve read in years. The Kinder Poison will grip you from the very first page and refuse to let go, sweeping you into an unforgettable adventure and leaving you breathless. Get ready for your newest obsession.” —Chelsea Bobulski, author of Remember Me

"Zahru is a witty, engaging narrator whose supernatural skills might be lacking but whose ability to throw out some epic one-linezingers is well honed and highly satisfying. The heirs are surprisingly nuanced as three once-loving siblings pitted against oneanother. A thrilling trip across sandswept dunes with a shocking ending that points to a dramatic sequel." —BCCB

"A great cross-country race, sibling rivalry, magic gifts (or lack thereof), and unlikely love all come together in a delicious stew of adventure. As in other fantasies, magical ability and ability type help determine someone’s value, but Mae bestows additional complexity on her characters by deliberately exploring the human traits that shape them as well." —Booklist

Natalie Mae is an ex-programmer, a dark chocolate enthusiast, and an author of young adult novels. She has also been a freelance editor and a Pitch Wars mentor, and she feels it notable to mention she once held a job where she had to feed spiders. When not writing, she can be found wandering the Colorado wilderness with her family. Find her on Twitter and Instagram @ByNatalieMae, and online at nataliemaebooks.com.
Loading...
or
Not Currently Available for Direct Purchase