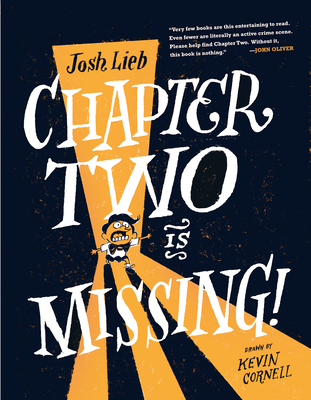 "Very few books are this entertaining to read. Even fewer are literally an active crime scene. Please help find Chapter 2. Without it, this book is nothing." -John Oliver, host of HBO's Last Week Tonight

Chapter Two is Missing is a hilarious picture book mystery starring a hopelessly lost narrator, an unqualified detective, and a very sneaky janitor, who are all surprised to discover that second chapter of the very book of which they are a part is--gasp--missing!

Do not be alarmed, but the second chapter of this book appears to be missing! It was here a minute ago, but now it seems to have simply walked off. Not only that, but some of the punctuation has gone topsy-turvy, a bunch of letter Ms are hiding in Chapter 5, and Chapter 45 appears to be from another book entirely! The narrator is going to need some assistance getting things in order, especially with the unhelpful detective who keeps butting in and that shifty janitor lurking about. Luckily he has you--the reader--to help! From Emmy winning comedy writer and producer Josh Lieb, Chapter Two is Missing is a hilarious whodunit, an irreverent look at storytelling, and perfect for fans of Snappsy the Alligator (Did Not Ask to Be in This Book) and The Book With No Pictures.

Praise For Chapter Two is Missing…

"Very few books are this entertaining to read. Even fewer are literally an active crime scene. Please help find Chapter 2. Without it, this book is nothing." -John Oliver, host of HBO's Last Week Tonight

"Shorter, with fewer words, than other books by Josh Lieb. This alone makes it a better book. Art by Kevin Cornell is good.  Should anyone read it? I don't know. Try it and see if you like it. (I liked it.)"
-Daniel Pinkwater, author of Fat Men From Space

"In this charming book, Josh Lieb hits all the right notes: the detectives, the word games, even a momentary dalliance with science fiction.  The writing is crisp and witty, the illustrations hilarious and engaging, the book a winning exercise of a fantastic imagination."-Andrew Solomon, New York Times bestselling author of Far from the Tree

Josh Lieb writes books and poetry and television shows. He lives with his wife and multiple pets (two of them human) in New York City.

Kevin Cornell is known for his humor and has illustrated many books, websites, and comics such as The Chicken Squad, Count the Monkeys, The Terrible Two, and Mustache! He spends his time in Philadelphia drawing made-up things.
Loading...
or support indie stores by buying on