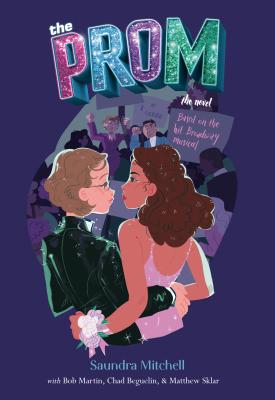 A Novel Based on the Hit Broadway Musical

Based on the Tony-nominated musical

Seventeen-year-old Emma Nolan wants only one thing before she graduates: to dance with her girlfriend at the senior prom. But in her small town of Edgewater, Indiana, that's like asking for the moon.

Alyssa Greene is her high school's "it" girl: popular, head of the student council, and daughter of the PTA president. She also has a secret. She's been dating Emma for the last year and a half.

When word gets out that Emma plans to bring a girl as her date, it stirs a community-wide uproar that spirals out of control. Now, the PTA, led by Alyssa's mother, is threatening to cancel the prom altogether.

Enter Barry Glickman and Dee Dee Allen, two Broadway stars who decide to take up the cause and get a little publicity along the way. But when they arrive in Indiana to fight on Emma's behalf, their good intentions go quickly south.

Between Emma facing the fray head-on, Alyssa wavering about coming out, and Barry and Dee Dee basking in all the attention, it's the perfect prom storm. Only when this unlikely group comes together do they realize that love is always worth fighting for.

Saundra Mitchell is the author of over twenty books for tweens and teens. Her work includes two anthologies for teens, Defy the Dark and All Out: The No-Longer-Secret Stories of Queer Teens throughout the Ages. For twenty years, she was the head screenwriter and an executive producer with Dreaming Tree Films on their various teen filmmaking programs and earned Academy Award eligibility ten times during her tenure. In her free time, she enjoys fandom, studying history, crochet, and spending time with her wife and her daughters. Her pronouns are Any/Any.

Matthew Sklar is a Tony® and Emmy® Award nominated composer. His works include the Broadway musicals: Elf, The Wedding Singer and The Prom.

Chad Beguelin is a four-time Tony® Nominee whose works include the Broadway musicals: Aladdin, Elf, The Wedding Singer and, of course, The Prom.

Bob Martin is a writer, performer, and producer of many celebrated musicals and television shows. The Prom is his third work on Broadway following the hit shows Elf and The Drowsy Chaperone, for which he earned a Tony Award.