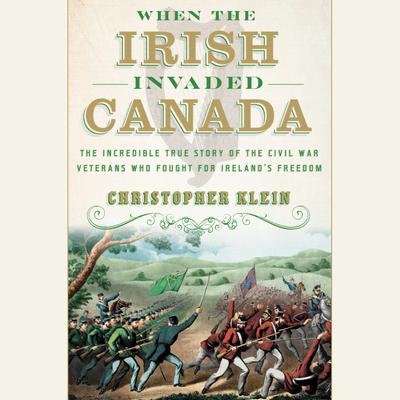 "An heroic and tragic story from a more innocent, less cynical era--when Irish Americans fought and died, not for profits and plunder, but for Irish democracy and freedom from the world's most powerful empire."
--Kerby Miller

"Christopher Klein's fresh telling of this story is an important landmark in both Irish and American history." --James M. McPherson


Just over a year after Robert E. Lee relinquished his sword, a band of Union and Confederate veterans dusted off their guns. But these former foes had no intention of reigniting the Civil War. Instead, they fought side by side to undertake one of the most fantastical missions in military history: to seize the British province of Canada and to hold it hostage until the independence of Ireland was secured.

By the time that these invasions--known collectively as the Fenian raids--began in 1866, Ireland had been Britain's unwilling colony for seven hundred years. Thousands of Civil War veterans who had fled to the United States rather than perish in the wake of the Great Hunger still considered themselves Irishmen first, Americans second. With the tacit support of the U.S. government and inspired by a previous generation of successful American revolutionaries, the group that carried out a series of five attacks on Canada--the Fenian Brotherhood--established a state in exile, planned prison breaks, weathered infighting, stockpiled weapons, and assassinated enemies. Defiantly, this motley group, including a one-armed war hero, an English spy infiltrating rebel forces, and a radical who staged his own funeral, managed to seize a piece of Canada--if only for three days.

When the Irish Invaded Canada is the untold tale of a band of fiercely patriotic Irish Americans and their chapter in Ireland's centuries-long fight for independence. Inspiring, lively, and often undeniably comic, this is a story of fighting for what's right in the face of impossible odds.