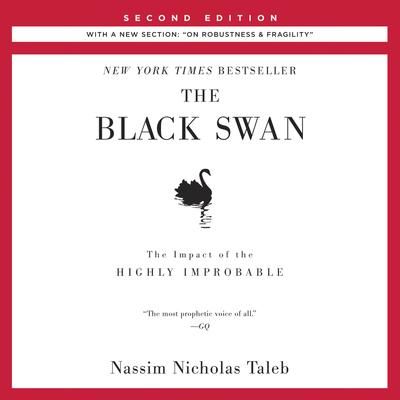 Second Edition: The Impact of the Highly Improbable: With a new section: "On Robustness and Fragility" (Incerto)

The Black Swan is a standalone book in Nassim Nicholas Taleb’s landmark Incerto series, an investigation of opacity, luck, uncertainty, probability, human error, risk, and decision-making in a world we don’t understand. The other books in the series are Fooled by Randomness, Antifragile, Skin in the Game, and The Bed of Procrustes.

For years, Taleb has studied how we fool ourselves into thinking we know more than we actually do. We restrict our thinking to the irrelevant and inconsequential, while large events continue to surprise us and shape our world. In this revelatory book, Taleb explains everything we know about what we don’t know, and this second edition features a new philosophical and empirical essay, “On Robustness and Fragility,” which offers tools to navigate and exploit a Black Swan world.

Elegant, startling, and universal in its applications, The Black Swan will change the way you look at the world. Taleb is a vastly entertaining writer, with wit, irreverence, and unusual stories to tell. He has a polymathic command of subjects ranging from cognitive science to business to probability theory. The Black Swan is a landmark book—itself a black swan.

Includes a bonus pdf of tables and figures.

NASSIM NICHOLAS TALEB has devoted his life to studying problems of luck, randomness, human error, probability, and the philosophy of knowledge. He has managed to transform his interests into three careers, as a man of letters, a financial trader, and a university professor. Although he spends most of his time as a flâneur, meditating in cafés across the planet, he is currently Distinguished Professor at New York University. His books have been published in thirty-six languages. He is widely recognized as the foremost thinker on probability and uncertainty. Taleb lives mostly in New York.