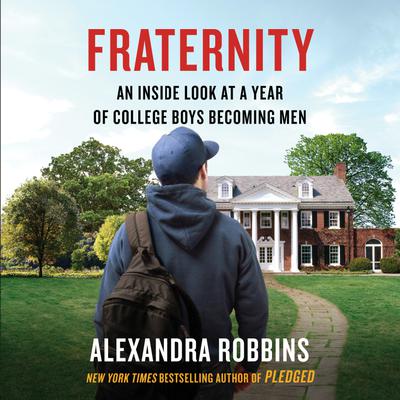 An Inside Look at a Year of College Boys Becoming Men

The New York Times bestselling author of Pledged is back with an unprecedented fly-on-the-wall look inside fraternity houses from current brothers’ perspectives—and a fresh, riveting must-read about what it’s like to be a college guy today.

Two real-life stories. One stunning twist. Meet Jake, a studious freshman weighing how far to go to find a brotherhood that will introduce him to lifelong friends and help conquer his social awkwardness; and Oliver, a hardworking chapter president trying to keep his misunderstood fraternity out of trouble despite multiple run-ins with the police.

Their year-in-the-life stories help explain why students are joining fraternities in record numbers despite scandalous headlines. To find out what it’s like to be a fraternity brother in the twenty-first century, Robbins contacted hundreds of brothers whose chapters don’t make headlines—and who suggested that many fraternities can be healthy safe spaces for men.

Fraternity is more than just a page-turning, character-driven read. It’s a vital book about the transition from boyhood to manhood; it brilliantly weaves psychology, current events, neuroscience, and interviews to explore the state of masculinity today, and what that means for students and their parents. It’s a different kind of story about college boys, a story in which they candidly discuss sex, friendship, social media, drinking, peer pressure, gender roles, and even porn. And it’s a book about boys at a vulnerable age, living on their own for perhaps the first time. Boys who, in a climate that can stigmatize them merely for being male, don’t necessarily want to navigate the complicated, coming-of-age journey to manhood alone.

Alexandra Robbins is the author of five New York Times bestsellers. An award-winning investigative reporter and speaker, she has written for outlets including The New York Times, The New Yorker, Vanity Fair, The Washington Post, and The Atlantic. Among other honors, Robbins, whose books include The Overachievers and The Nurses, has received the Heartsongs Award for “contributions to the mental health of children and young adults,” and a Books for a Better Life Award.