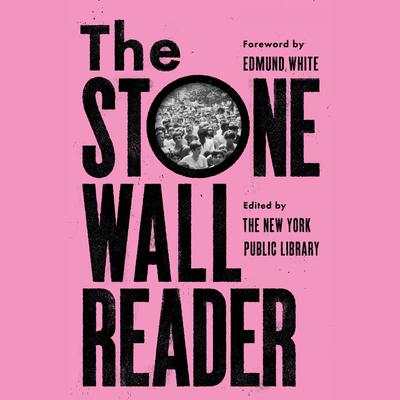 "...a remarkable audio experience that emphasizes the revolutionary power of LGBTQ voices and provides an invaluable record of a community that refuses to be silenced." -AudioFile magazine Earphones Award winner

For the fiftieth anniversary of the Stonewall uprising, an anthology chronicling the tumultuous fight for LGBTQ rights in the 1960s and the activists who spearheaded it, with a foreword by Edmund White.

June 28, 2019 marks the fiftieth anniversary of the Stonewall uprising, which is considered the most significant event in the gay liberation movement, and the catalyst for the modern fight for LGBTQ rights in the United States. Drawing from the New York Public Library's archives, The Stonewall Reader is a collection of first accounts, diaries, periodic literature, and articles from LGBTQ magazines and newspapers that documented both the years leading up to and the years following the riots. Most importantly the anthology spotlights both iconic activists who were pivotal in the movement, such as Sylvia Rivera, co-founder of Street Transvestites Action Revolutionaries (STAR), as well as forgotten figures like Ernestine Eckstein, one of the few out, African American, lesbian activists in the 1960s. The anthology focuses on the events of 1969, the five years before, and the five years after. Jason Baumann, the NYPL coordinator of humanities and LGBTQ collections, has edited and introduced the volume to coincide with the NYPL exhibition he has curated on the Stonewall uprising and gay liberation movement of 1969.

*Includes a PDF of the list of stories and narrators as well as permissions credits.

JASON BAUMANN Coordinator of Humanities and LGBT Collections at the New York Public Library, where he develops and promotes literature, philosophy, and religion collections at the Stephen A. Schwarzman Building. Baumann coordinates the Library's LGBT Initiative, for which he has curated two exhibitions--1969: The Year of Gay Liberation and Why We Fight: Remembering AIDS Activism. Baumann will curate a major Stonewall exhibit at NYPL for 2019.

EDMUND WHITE is the author of A Boy's Own Story (1982), The Beautiful Room Is Empty (1988) and The Farewell Symphony (1997). He received the National Book Critics Circle Award for Genet: A Biography. He won the 2018 PEN/Saul Bellow Award for Career Achievement in American Fiction.