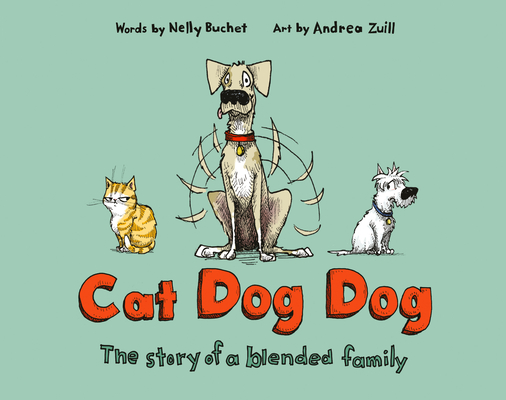 The Story of a Blended Family

“This is a refreshing and innovative take on a subject that kids don’t get to have agency over in real life. Buchet and Zuill use humor and accessibility as tools to allow young children to command the narrative on their own terms. Zuill’s zany and unconventional perspective is a perfect match for the simplicity of Buchet’s narrative. Bravo!!”
— Jane Knight, Bear Pond Books, Montpelier, VT
View the List

Here is the oh-so-hilarious and adorable story of a blended family-- using just a few words in various configurations-- from the pets' point-of-view!

Cat and Dog live with their human in a suburban house with a big backyard. Sure, they fight like.... well, cats and dogs, but they're used to one another. Dog-- a different dog-- lives a happy only child life in the city with his dad. He has the bed to himself, he never has to share his toys, and that's the way he likes it. So what happens when the Dog's dad and Cat and Dog's mom move in together? Well, it's chaotic. There's not enough room on the bed, for starters. But as the seasons pass, the three animals become a trio and learn to (mostly) love one another. Just as they're settling into a cozy life as a threesome, along comes..... a baby! This laugh-out-loud picture book, which is the recipient of The Irma Simonton Black and James H. Black Award for Excellence in Children’s Literature, cleverly uses two repeating words and is sure to strike a chord with kids dealing with the ups-and-downs of settling into a blended family of their own.

Praise For Cat Dog Dog: The Story of a Blended Family…

“This is perfect for kids just climbing aboard the reading train, but it could also work as a comedic read-aloud to younger kids.” —The Bulletin, starred review

"... a picture book magnum opus about the intricacies of the step family." —Shelf Awareness

"Zuill takes a common theme—finding the courage to be yourself—and makes it funny, heartwarming, and inspiring." —Booklist, starred review

Nelly Buchet is the author of Cat Dog Dog, called a “picture book magnum opus” by Shelf Awareness. The book received starred reviews from Kirkus and The Bulletin and was named an American Library Association Notable Book. She was awarded a Dalai Lama Fellowship and has taught nonviolent resolution in schools. Nelly lives in Berlin. Find her on the Web at nellybuchetbooks.com or on Instagram @nellybuchetbooks.


Andrea Zuill is the author-illustrator of Regina is NOT a Little Dinosaur, an Indie Next List selection; Sweety, a Booklist Best Book of the Year; and Wolf Camp, a Children’s Choice Award finalist. She is also the creator of Business Pig, Dance Is for Everyone, and Marigold & Daisy. Andrea is the illustrator of Cat Dog Dog by Nelly Buchet, an American Library Association Notable Book which was called "A clever, winning read-aloud for modern families" in a starred review from Kirkus. Her work has been exhibited in galleries in California, Texas, and New York. Visit Andrea on the Web at andreazuill.org or follow her on Twitter at @AndreaZuill.