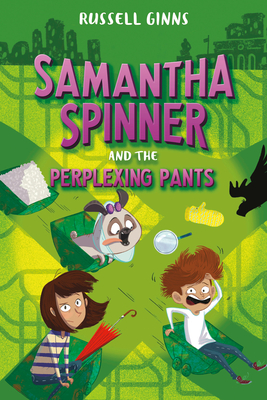 Samantha Spinner and the Perplexing Pants

Take another super-big globe-trotting, plaid pants spotting adventure with Samantha Spinner and her brother, Nipper, in the fourth book in this hilarious, puzzle-packed series! Perfect for fans of Mr. Lemoncello's Library and the Secret series, and classics like Holes and The Westing Game.

Samantha Spinner's Uncle Paul has gone missing again. But this time, he left behind a yellow mitten and a note: Watch out for the SNOW!

That's weird, especially because they're in Seattle . . . and it's the middle of summer!

Samantha has defeated ninjas, battled clowns, and faced down daredevils. But with the sinister SNOW, she may have met her math!*

A puzzling uncle, a mission to Michigan, and a mysterious mitten. Let's hope Samantha's super-annoying brother can lend her a hand with . . . the PERPLEXING PANTS!

Praise For Samantha Spinner and the Perplexing Pants…

Praise for the Samantha Spinner Series:

“Full of adventure and survival, [Samantha Spinner and the Super-Secret Plans is] great for [readers of] series like The 39 Clues.” —School Library Journal

"Appealing fare for kids who enjoy zany adventure tales with side helpings of historical/geographical trivia and wacky humor.” —Booklist