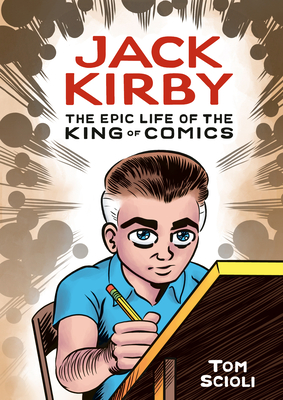 The Epic Life of the King of Comics

Told in vivid graphic novel form by a groundbreaking Eisner-nominated comics creator, the long-overdue biography of the legend who co-created Captain America, Iron Man, Black Panther, the Fantastic Four, the X-Men, and many more superhero favorites.

“A fast-paced celebration of an underheralded legend within the comic-book industry.”—Kirkus Reviews

This sweeping, full-color comic book biography tells the complete life story of Jack Kirby, co-creator of some of the most enduring superheroes and villains of the twentieth century for Marvel Comics, DC Comics, and more. Critically acclaimed graphic novelist Tom Scioli breathes visual life into Kirby's life story--from his days growing up in New York during the Great Depression and discovering a love for science fiction and cartoons to his time on the frontlines in the European theatre of World War II where he experienced the type of action and adventure he'd later imbue his comic pages with, and on to his world-changing collaborations at Marvel with Stan Lee, where the pair redefined comics as a part of pop culture.

Just as every great superhero needs a villain to overcome, Kirby's story also includes his struggles to receive the recognition and compensation that he believed his work deserved. Scioli captures his moves from Marvel to DC and back again, showing how Kirby himself and later his family fought to preserve his artistic legacy.

Drawn from an unparalleled imagination and a life as exciting as his comic book tales, Kirby's super-creations have influenced subsequent generations of creatives in the comics field and beyond. Now, readers can experience the life and times of a comics titan through the medium that made him famous.

Praise For Jack Kirby: The Epic Life of the King of Comics…

“Jack Kirby's real life adventures were just as epic as the ones he imagined in the comics he created. Scioli captures that epic feel using his own, inimitable style, and tells a story that's long overdue.”—Joe Casey, co-creator of Gødland

“This is clearly the comic that Tom Scioli has been building toward for decades. He's answered every question I've had about Kirby within the pages of this biography. it's genius! This is the masterwork that Jack Kirby deserves.”—Ed Piskor, author of Hip Hop Family Tree and Red Room and co-host of YouTube channel Cartoonist Kayfabe

Tom Scioli is an Eisner-nominated writer and artist who specializes in comics and graphic novels. He’s the author of the non-fiction graphic biography, Jack Kirby: The Epic Life of the King of Comics as well as several science-fiction and superhero originals like American Barbarian, The Myth of 8-Opus, and Godland. He has also reinvented established series with Fantastic Four: Grand Design, Super Powers, Transformers vs G.I. Joe, and a cyberpunk reimagining of Go-Bots. He is known for his singular drawing style, kinetic page layouts, and imaginative writing and is one of a small number of auteur cartoonists who writes, draws, colors, and hand-letters his comics. He’s also the host of the pop culture centered Total Recall Show and a frequent contributor to the Cartoonist Kayfabe podcast.
Loading...
or support indie stores by buying on