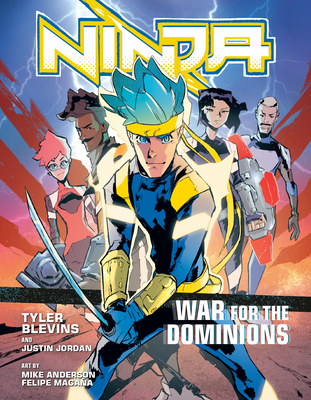 War for the Dominions: [A Graphic Novel]

The Great Beasts have been unleashed. The war has begun. Gaming superstar Ninja returns in the sequel to the graphic novel Ninja: The Most Dangerous Game!

Empowered by the show of resilience from Ninja and his friends in the Ketterung—a broadcasted battle-royale game realm controlled by evil overlord Strigus Thule—the people in all of Thule’s 1000 Dominions are now rebelling. In response, Thule decides to unleash his Great Beasts, the most powerful victors from previous games, kept to serve as the villainous gamemaster’s tools for all of eternity.

Rather than use their remaining energy to return home at the end of their game, Ninja convinces his friends to stay and help him free the Dominions from Thule’s tyrannic rule. Will the tenacity, integrity, and camaraderie that kept our hero and his crew alive in the first challenge help them defeat the horrifying Great Beasts—and Strigus Thule himself?

Tyler “Ninja” Blevins is a professional gamer, streamer, and content creator. He is massively popular for playing Fortnite (which boasts forty million players per month), though he initially gained his fanbase by competing in professional Halo tournaments. After quitting esports to become a streamer, he played various First-Person Shooter Battle Royale games (such as H1Z1 and PUBG), but found his big break with Fortnite. His energetic, entertaining persona and unmatched gaming prestige have garnered him tens of millions of followers worldwide.

Justin Jordan has penned comics for Image, DC, and Marvel Comics, as well as the Call of Duty: Zombies graphic novels for Dark Horse Books and Urban Animal on Webtoon. In 2012, he was nominated for the Harvey Award for Most Promising New Talent and is one of the writers of the Eisner-nominated In the Dark: A Horror Anthology and Where We Live: A Benefit for the Survivors in Las Vegas.

Mike Anderson is a comic book artist and animator from Oklahoma, where he lives with his wife and kids.

Felipe Magaña is a character designer and concept artist for comics and video games.
Loading...
or support indie stores by buying on